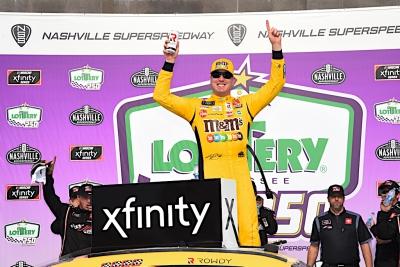 Busch held off Justin Allgaier on two restarts in the final 10 laps to score the win.

With his win on Saturday, Busch becomes only the third NASCAR national series driver to win 100 or more races. Richard Petty is first with 200 wins, David Pearson is second with 105 wins and Kyle Busch is third with his 100 NASCAR Xfinity Series wins.

Busch, who started the race from the pole, led 122 of the 189 lap race. The race was extended 1 lap due to a late race incident.

Rounding out the top five were Justin Allgaier in second, Harrison Burton in third, Josh Berry in fourth and AJ Allmendinger in fifth.

Austin Cindric, who won the first stage of the race, saw his day end when he was involved in an incident with 30 laps to go when Michael Annett and Daniel Hemric collided. Annett’s car came down the track and collected Cindric’s car in the back, sending him into the wall.

Rounding out the top ten were Brandon Brown in sixth, Jeb Burton in seventh, Noah Gragson in eighth, Austin Hill in ninth and Riley Herbst in tenth.

The NASCAR Xfinity Series will race at Pocono Raceway on June 27th at 12:00 p.m. Eastern on NBCSN