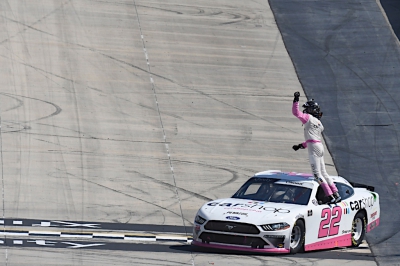 Cindric passed Justin Allgaier for the race lead with 51 laps to go in the race.

With his win on Saturday, Cindric is a 3-time winner this season and 11 wins total in his career.

“It is hard to believe but starting 16th at this joint it isn’t easy to pass,” Cindric told FS1 post-race. “We just kept at it the whole time. We made the right adjustments on pit stops and I feel like I have learned a lot about this race track.”

Rounding out the top five were Josh Berry in second, Justin Allgaier in third, AJ Allmendinger in fourth and Ty Gibbs in fifth.

Rounding out the top ten were Harrison Burton in sixth, Michael Annett in seventh, Ryan Sieg in eighth, Daniel Hemric in ninth and Brandon Brown in tenth

Ryan Sieg, who finished eighth was his third top ten in a row.

The NASCAR Xfinity Series will run its inaugural race at Circuit of the Americas on May 22nd at 4:00 p.m. Eastern on FS1.