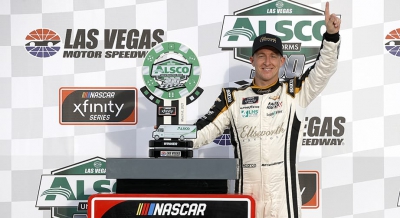 Allmendinger took the race lead on a restart with 13 laps to go in the race and pulled away to win.

For Allmendinger, Saturday’s victory marks his sixth Xfinity career win and his second win on an oval.

Rounding out the top five were Daniel Hemric in second, Brandon Jones in third, Austin Cindric in fourth and Noah Gragson in fifth.

Daniel Hemric, who finished in second led a race-high 74 laps, finishing runner-up for the eighth time in his career.

Rounding out the top ten were Michael Annett in sixth, Josh Berry in seventh, Justin Haley in eighth, Harrison Burton in ninth and Jeb Burton in tenth.

Austin Cindric currently leads the Xfinity standings after four races with 191 points. Daniel Hemric is second with 170 points, Brandon Jones is third with 140 points, Jeb Burton is fourth with 133 points and Justin Haley is fifth with 128 points.

The NASCAR Xfinity Series will head into Phoenix Raceway at 5:30 p.m. Eastern on March 13 with coverage on FS1.