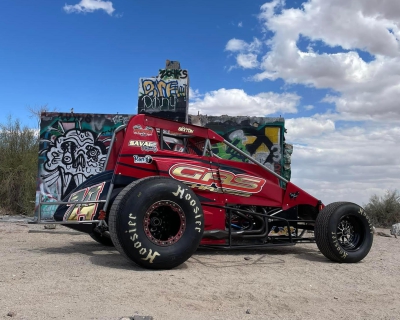 Nearly five months after his wild crash, “Shugah” Shane Sexton will return to 410 sprint car action in the USAC/CRA Series Saturday night at Perris Auto Speedway.  The effervescent teen will be debuting a brand new GAS Chassis in his return.  Spectator gates at the popular half-mile clay oval will open at 5:00 p.m. and racing will start at 7:00.

Saturday will be the sixth start of the year for the 18-year-old in the premier wingless sprint car series West of the Mississippi. Four of those starts have been in Arizona and the other two have been at Perris. Sexton’s plan was to race most of the races in the series this year.  The season started out that way when he started five of the first seven races only sitting out a pair in Central California.  His early season was punctuated by some impressive main event passing jobs.  His best finish came at Cocopah on January 29th.  On that night, the talkative racer started 18th in the main event and drove all the way to 11th for his best finish of the year.  He also earned the Hard Charger Award on that night.  Even though he has only started six of the 14 races in the series this year, he is still ranked 21st in the championship point standings.  He should move back into the top 20 tomorrow night.

Things were rolling along well for Sexton until the last Saturday in April at Perris. Heading into turn one on lap two of the main event, he tangled with another car and began a series of nasty flips that saw him tumble all the way to the crashwall.  The car was bent, but it did its job and Sexton climbed out unscathed and ready to race again.   In fact, he was supposed to race a couple of times already in a new chassis, but there was a delay in getting his engine back after it was sent out to be refreshed.

Sexton should be very familiar with the GAS Chassis as his father Stan is the proprietor of the new company and builds them in his Warner Springs Ranch shop.   GAS stands for Gatlin And Sexton.   The Gatlin in the name is Sexton’s grandmother Nita Gatlin.  For more information on the new chassis or for pricing, please use the contact information in this press release.

While he was out of his 410 sprint car, Sexton stayed busy wheeling a Brian Fonseca owned Lightning Sprint Car in six races in three different states.  Included in the six starts was a win in a preliminary at the prestigious Dirt Cup at Washington’s Deming Speedway on July 15th.  He also placed second in the POWRi Lightning Sprint Car Nationals at the Central Missouri Speedway on May 28th.  Last month, he finished third in the CLS race at the Santa Maria Speedway.

Adult tickets to see “Shugah” Shane and the rest of the stars in action on Saturday are $30.00.  Seniors 65 and over get in for $25.00.  For kids 6 to 12, it is just $5.00.  Children 5 and under are admitted free. There will be plenty of tickets available for everyone at the ticket window on Saturday, this event will not sell out. Perris Auto Speedway is located on the Lake Perris Fairgrounds at 18700 Lake Perris Drive in the city of Paris (91767).  The track website is http://www.perrisautospeedway.com/ and the office phone number is (951) 940-0134.  The fairgrounds charges $10 for parking.

For fans who come east on the 91 Freeway to get to The PAS, the eastbound lanes will be shut down all weekend in Corona.  Fans can take the 91 east to either the 605 or the 57 north to the 60 Freeway east.

Sexton and the #74 team wish to extend their thanks to the following 2022 racing season partners.  Gas Chassis, Key Brothers Racing, Nita Gatlin, Hugh Jorgan, Mike Pridgeon Racing Engines, AG Sandcars, Powder 1, Ron’s Tire and Brake, and Savage Racing.  If you would like to be a part of this fun, upcoming team and get exposure not only at the tracks but around the world on Flo Racing, please contact Shane Sexton at This email address is being protected from spambots. You need JavaScript enabled to view it. or (619) 362-5921.

Sexton would like to extend a thank you to Brian Fonseca and Samantha Sproull for the opportunity to wheel their lightning sprint and he would like to thank their team sponsors for making it possible.  They are the Shingle Springs Band of Miwok Indians, Foothill Tractor & Heavy Equipment, KB Rod Benders, and MJK Auto Sales.