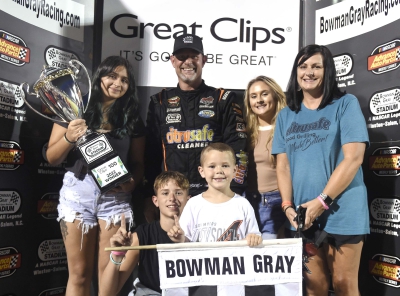 With a rough start to his season, many people questioned why 10-time champ Burt Myers wasn’t performing well in 2022.

Those questions have quickly gone away.

Since June 25, Myers turned on the heat – and he picked up his third win of the season on Saturday night in the Great Clips 100. In doing so, he defeated Tim Brown, who was runner-up. And Myers did it by passing Brown with 18 laps left and held on the last 18 laps.

"We've got a secret mission this year for this team. So far, we've accomplished what we've wanted to accomplish," Myers said. "I knew that it was going to be tough with 22 (Jonathan Brown), 65 (Danny Bohn), 83 (Tim Brown), and all those guys up front. I had confidence in my car, my team, and my God-given talent to try to do the best we could do. And here we are. I can't believe it."

Tim Brown had the fastest qualifying lap and then drew the pole after the full-field redraw. Brown held on for the first 81 laps, surely hoping to claim his first win of 2022. But Myers slipped by and stole the lead.

"I knew how hungry Tim was," Burt Myers said. "But in the situation that unfortunately we've put ourselves in by not being a contender for the championship right now, it's just taking all the stress away."

Tim Brown, who was two points ahead of Ward for the top spot in the points chase before the race, leapfrogged Ward and now leads Ward by six points with two weeks left in the season. Chris Fleming is third, 38 points behind Tim Brown, Jonathan Brown is in fourth, 45 points back, and Burt Myers and Jason Myers are tied for fifth, 54 points behind.

"We've had more fun in these last five weeks than I can remember in a long time," Burt Myers said.

There were seven cautions during the 100-lap race and Burt Myers, who qualified second and started fourth after the redraw, took the lead after the sixth of seven cautions on lap 78. Burt Myers bumped and drafted Tim Brown around turn 2 and went to the outside of Brown for the lead.

"You know right away when he's got you by three-quarters of a car, when you come up off the corner your best bet is to get in line,” Burt Myers said. "When we came out of the start-finish line we were door-to-door. I knew that was my shot. And I was able to whip it around there to keep in front of him enough.

"I could tell his car was getting greasy getting in, and he was able to back the corner up, which was making him tight off. So, I knew that was time to make my move."

The only thing that stood in front of Burt Myers and his third win of the season was whether a caution flag would come up in the final portion of the race, Sure enough, a caution flag came out with nine laps remaining. Burt Myers was able to get a good enough of a restart to stay in front Tim Brown.

In addition, Burt Myers won the $9,000 Fans' Challenge two weeks ago in the previous 100-lap race. There are twin 50-lap races next week, and the season closes the following week with a 150-lapper.

"My thoughts right now are to come back next week and try to win both 50-lappers," he said. "The 150 is not even in our mind right now. But we're moving forward to next weekend and try to win the two races that are in front of us, and see what the next week gives us."

The final Fans' Challenge of the season was Saturday night, where the top four qualifiers have the option to go to the back of the field. If any or all of those drivers finish in the top four they win all or a portion of the money available that night. Burt Myers won $9,000 two weeks ago, so that meant the prize pool was back down to $3,000.

Tim Brown qualified on the pole, followed by Burt Myers, John Holleman IV, and Lee Jeffreys. Only Holleman and Jeffreys took the Fans' Challenge. And as it turns out, Holleman was the only one of the two to finish in the top four, finishing fourth after starting 25th. Jeffreys finished ninth.

Holleman moved to fourth on lap 51 and remained fourth for the rest of the race.

Once Holleman moved to fourth, he had to decide whether he wanted to stay in the top four and win the money or go for the win.

"They said over the radio at the beginning of the race, 'I'll let you know when you get to fourth. That's our goal, fourth,'" Holleman said. "I said, 'If y'all (say) fourth I'm cutting my radio off.' Because I didn't come here to finish fourth. I come here to win the race"

As for what Holleman will do with the money, he's going to do what most race drivers do with money.

"Put it back in the car," he said. "I mean, we've had such tough luck this year. We tore a lot of stuff up. We've blown a couple motors. We needed that monetarily, for sure, but like I said, just a confidence-boost for this team to get everybody's heads back up and get everybody's spirits up. And we're back, baby. So, let's get it back for the next few weeks."

In the McDowell Heating and Air Sportsman Series, 14-year-old Riley Neal may be young but he keeps winning races. He won the first 20-lap race on Saturday - his second victory of the season.

Neal was second and railed pole-sitter and leader Wesley Thompson until turn 2 of lap 17. Neal was just behind Thompson around the turn, and Neal nudged Thompson just a bit. Thompson slid to the outside, allowing Neal to take the lead.

Amber Lynn showed back up in Winner’s Circle on Saturday, taking the victory in the second Sportsman race. However, she refused post-race technical inspection and was disqualified as a result.

In the Law Offices of John Barrow Street Stock Series, the race scheduled for 20 laps was cut short after 13 laps because of the 20-minute time limit.

Gerald Robinson sat on the pole and led all 13 laps to win his first race of the season. Billy Gregg finished runner-up, Bryant Robertson was third, and Zack Staley was fourth.

"I was ready for him," Robinson said of Gregg. "I was just lucky he didn't get to my back bumper.”

Connor Keaton was third and Brandon Brendle was fourth.

"It was a different one in there tonight. This one's (Keaton) got real good talent. The other one just needs to calm down a little bit," Wall said of Keaton and his brother, Grayson, and a confrontation they had last week. "We straightened everything out.”