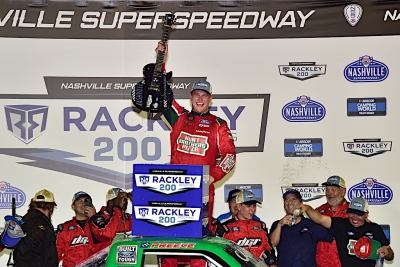 Preece, driver of the No. 17 Ford for David Gilliland Racing, joins Johnny Benson and Kyle Busch as the only three drivers with multiple Truck Series victories at Nashville.

"We get a second guitar - I may have to start a band," said Preece of Nashville's famous trophy. Preece also won an extra $50,000 as part of the Triple Truck Challenge in his eighth career Truck Series start.

"I just want you guys to know that a lot of this is built in the shop. These guys work their tails off. I know what it takes to win races and they give me phenomenal race trucks, so I’m just proud to be the one holding the steering wheel.”

Preece led a race-high 74 laps, won the pole position earlier on Friday, and won Stage 2 after finishing second in Stage 1.

"We had another fast Ford, just not quite fast enough," said Smith, driver of the No. 38 Ford for Front Row Motorsports.

Smith leads the series standings by 21 points over John Hunter Nemechek, who recovered from an early incident to finish ninth.

The weekend action continues with the Tennessee Lottery 250 NASCAR Xfinity Series race on Saturday at 2:30 p.m,. (USA) and the Ally 400 NASCAR Cup Series race at 4 p.m. on Sunday (NBC).

Kids 12 and under get in FREE for Saturday’s race and for just $10 (all with a paying adult) for the Ally 400 NASCAR Cup Series race on Sunday, June 26. For Nashville Superspeedway ticket information visit NashvilleSuperspeedway.com or call 866-RACE-TIX for details.