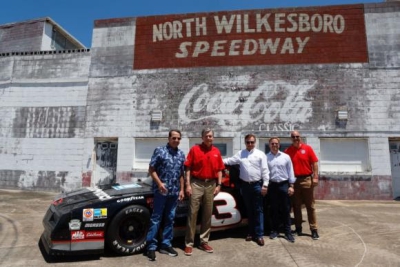 North Carolina Gov. Roy Cooper toured historic North Wilkesboro Speedway on Tuesday ahead of grassroots racing returning to the iconic short track later this summer. The governor was joined by Speedway Motorsports President and CEO Marcus Smith, NASCAR Hall of Fame team owner Richard Childress, legendary NASCAR driver Harry Gant and a number of state and local officials to tout revitalization efforts at the celebrated facility, which on Wednesday will mark 75 years since its first race.

Following a tour of the facility and three ceremonial pace laps with Childress behind the wheel of a Chevrolet Camaro, Cooper addressed the vital importance of motorsports to the state’s economy.

“North Carolina’s speedways are strong economic drivers for communities across the state that bring friends, families and neighbors together for a rip-roaring good time,” Cooper said. “North Wilkesboro Speedway is just one of many racetracks that will be able to cross the finish line on much-needed repairs with these state funds – racing in North Carolina is back and here to stay.”

Ahead of a planned reopening in August – the first racing scheduled at North Wilkesboro Speedway in more than a decade – Speedway Motorsports has begun cleanup and preparation efforts for the famed speedway. For Racetrack Revival later this year, the goal is to allow racers and fans to enjoy North Wilkesboro’s original facility one last time.

Fans will have their chance on Wednesday, the day marking 75 years since the first race, to enjoy an open house, where they can walk the track, see show cars, purchase new merchandise and reserve tickets to Racetrack Revival from 5:00 to 8:00 p.m.

Smith has likened his vision of North Wilkesboro Speedway to that of a resto mod, maintaining the speedway’s nostalgic appeal while upgrading the facilities to include modern conveniences like water, sewer and WiFi. Some of the funding for future improvements will come through American Rescue Plan allocations in the North Carolina state budget, which earmarks $18 million for infrastructure improvements at the Wilkes County landmark. The funds are part of $45.8 million allocated to 15 local governments to help revitalize 17 motorsports venues across the state.

“It’s just a real testament to what happens with a fantastic community,” he said. “Amazing history, the right support that we got from all of you – all of our racing family and of course, from the governor's office – what a special, special thing. And it doesn't happen very often. It's really hard to put this into a formula, but sometimes things come together just right and special things happen.”

After more than a decade without racing, the famed 0.625-mile facility will once again play host to a bevy of grassroots racing when Racetrack Revival descends upcoming North Wilkesboro Speedway later this year. Racetrack Revival will feature nearly a month of grassroots racing on the current pavement in August. Then, following removal of the old asphalt, racing will return on the original dirt in October.

State officials also shared details about the Moonshine and Motorsports Trail, a new effort to weave together the rich history of moonshine and motorsports from across the state.

“In addition to being an economic engine, motorsports are an important part of North Carolina history and culture,” North Carolina Department of Natural and Cultural Secretary Reid Wilson said. “The Department of Natural and Cultural Resources is excited to announce that the Moonshine and Motorsports Trail will launch in 2023 to help celebrate the rich and diverse history of distilling and racing in our state. The trail aims to drive tourism and benefit local economies across the state, particularly in smaller communities.”