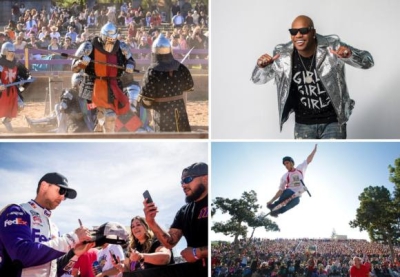 With an unmatched lineup of music, food and fun, Charlotte Motor Speedway is redefining the fan experience as the new home of Circle K Speed Street May 27-29. Even before the green flag falls on a triple-header weekend of NASCAR action, the 10-acre Circle K Speed Street will come to life with a wide array of music, entertainment and interactive displays right outside the legendary 1.5-mile superspeedway.

Highlights of this year’s Circle K Speed Street attractions include:

Stunt Shows: From high-flying aerial exhibitions by the Xpogo stunt team and the King BMX to the medieval vibes of Full Steel Combat and the edge-of-your-seat thrills of the Globe of Death, fans will be greeted by a carnival like atmosphere throughout the weekend at Circle K Speed Street. The family friendly entertainment will rotate unique stunt shows throughout the day all weekend long.

Click here for a full schedule of the entertainment lineup.

Partner Activations: Fans looking for a little hands-on fun will find plenty of options at Circle K Speed Street, with partner activations ranging from spin-to-win giveaways and yard games ranging from cornhole to giant Jenga and Connect Four. Within the Coca-Cola footprint, fans can test their driving mettle on iRacing simulators, grab photos with a Coca-Cola show car or write letters of support to be delivered to military units through the USO.

Duke Energy’s new EV Garage is an immersive walk-through experience for attendees to learn all about the rapidly changing world of electric vehicles, and get a hands-on experience for what it’s like to be an EV owner.

The U.S. Air Force display, called “The Hanger,” will showcase the expertise of Air Force Maintainers who work every day in hangars and on the flight line to keep aircraft flying. Fans can snap a photo with a full-size F-16 Fighting Falcon, repair a CV-22 hydraulic leak with the help of LeapMotion technology, perform an in-flight refueling mission using virtual reality or test their speed and determination with the C-130 Hercules tire change challenge.

Driver Appearances: Circle K Speed Street and Charlotte Motor Speedway are working to bring drivers and fans closer than ever, with appearance and driver Q&As throughout the weekend. Michael McDowell, Todd Gilliland and Corey Lajoie are scheduled to take the stage on Saturday, while Sunday’s star-studded lineup will include Austin Dillon, Erik Jones and Ricky Stenhouse Jr.

TICKETS:
Tickets are still available for the May 27-29 Coca-Cola 600 Weekend, with three-day packages starting at $99. Weekend tickets for children ages 12 and under are just $10. Fans can purchase tickets online at www.charlottemotorspeedway.com or by calling the ticket office at 1-800-455-FANS (3267). Admission to Circle K Speed Street concerts by Flo-Rida (Friday) and The Steve Miller Band (Saturday) is free with any race ticket.