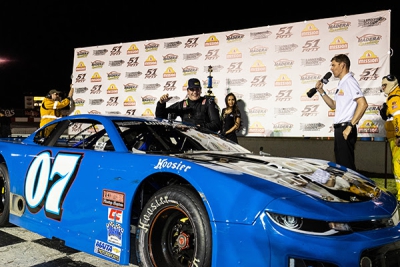 Vancouver, Wash.’s Jadan Walbridge outlasted Las Vegas’ Kyle Keller in one of the most contested races in years at Madera Speedway on Saturday night, earning the 80-lap Lunkerdaddy Pro Late Model win powered by Mission Foods. Walbridge and Keller spent nearly half of the race distance alongside of each other on the one-third mile speedway.

Walbridge earned fast-time but drew the six in the redraw while Keller drew the outside pole alongside Carlos Vieira. Viera and Keller raced side-by-side at the start before Vieira cleared him in turn two on lap three. Newport Beach’s Sean Hingorani, the 15-year-old making his track debut, tagged the front stretch wall then slowed for a caution on lap seven. Keller used the outside on the restart to take the lead from Vieira. The caution fell again on lap 22 when Shaun Reynolds spun in turn one. Keller picked the outside again, this time with pressure on the inside from Walbridge.

The duo picked up their side-by-side action but Keller drove off with the lead. They engaged again on lap 34 in a battle which turned into a sustained double wide affair. They were separated by just .006 seconds on lap 45 before Walbridge broke free with the lead on lap 46. Walbridge led Keller, Eagle, Idaho’s Jacob Smith, 14-year-old Kasey Kleyn of Quincy, Washington, and Vieira into the lap 50 break.

Walbridge picked the outside out of the break and Keller surged inside to lead lap 51. Walbridge crossed him over exiting turn two to get to the inside. They raced next to each other once more before Walbridge had the lead in hand on lap 54. Keller crossed over Walbridge on the front stretch to nab the lead on lap 58.

They never lost touch of each other with Keller inside and Walbridge outside. Walbridge led lap 68 by .005 seconds but Keller battled back to lead lap 69 by .026 seconds. The teenagers were still side-by-side when Walbridge led lap 71 before Keller crossed the stripe first on lap 72. Keller cleared Walbridge and appeared poised for victory on the following lap.

2021 51FIFTY Jr. Late Model champion Brody Armtrout of Smartsville and Smith collided in turn one to bring out the caution on lap 76. Keller picked the inside line for the four lap shootout. Walbridge swung wide entering turn one and soared past Keller on the backstretch to lead lap 77. Walbridge snuck away for the win followed closely by Keller. Vieira drove past Kleyn for third with Shelden Cooper earning the fifth position.

Sean Hingorani emerged from a highly competitive 51FIFTY Jr. Late Model Series 70-lap feature with the win in his Madera Speedway debut. Hingorani tied Madera’s Robbie Kennealy in qualifying but was credited with the quick time in the tie-breaker. Kennealy had the last laugh when he drew the pole starting position while Hingorani drew fourth.

Lane Anderson of Fort Bragg and Rebecca Dubie of Tracy tangled in turn four for a caution on lap three. Manteca’s Ethan Nascimento used the caution to dive underneath Brody Moore of Colorado for second on the restart. Moore ended up drifting back to fifth on the outside line and into a battle with Loomis’ Kenna Mitchell. Nascimento ran down Kennealy for the lead before a caution on lap 25 for Dubie spinning. Nascimento tried to crossover Kennealy on the backstretch but Kennealy maintained the lead on lap 28. Nascimento led lap 29 by just .011 seconds and led the next six laps by just a few thousandths each in a great race up front. Hingorani navigated his way to third during the duel at the front as well.

Kennealy went outside Nascimento lead lap 36 but lap 37 was credited back to Nascimento. Kennealy took 38 then Nascimento led lap 39. Coming to end the lap 40 opening segment, Kennealy charged back for the lead ahead of Nascimento, Hingorani, Kleyn, and Mitchell.

Following MAVTV interviews and adjustments to their race cars, Hingorani jumped inside his teammate Nascimento for second on the restart. Anderson bounced off the backstretch wall and collected Joaquin Stewart for a caution flag. Hingorani lined up next to Kennealy when racing resumed but drove wide and lost several positions. After a trio of cautions for solo spins, fluid was found to be pouring out of Monty Tipon’s car which required a lengthy clean up.

Nascimento was passed for second by Hingorani and third by Kleyn on the restart as he struggled on the slick outside groove. A caution on lap 59 set up Hingorani’s drive for the win. He used the outside to lead lap 60 over Robbie Kennealy. Hingorani led the next five laps alongside Kennealy before solidly grabbing possession of the top spot on lap 65. The caution flew on lap 67 when Mitchell spun after a three-wide battle into turn three for third. Hingorani led the final mile of action to win followed by Kennealy, Kleyn, Nascimento, and Moore.

For more information about the Madera Speedway including how to advertise with a race team on MAVTV please visit www.racemadera.com or call the race office at 209-356-1968.
The 2022 season would not be possible without the support of Lunkerdaddy Fishing Lures, 51FIFTY LTM, Mission Foods, 805 Beer, Race 2B Drug Free, Competition Carburetion, Hoosier Tires, and Sunoco Race Fuel.