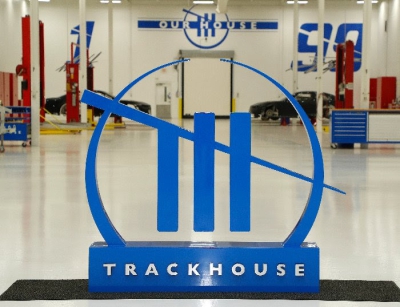 Trackhouse Racing opened its rebranded race shop to its 120 employees Monday morning in Concord, North Carolina as one of the NASCAR Cup Series newest teams continued preparations for the 2022 Cup Series season.

Team Owner and Founder Justin Marks joined drivers Daniel Suárez and Ross Chastain on Monday to speak to the employees. Team partner Pitbull sent along a video message welcoming everyone to the team and asked each employee to take time "to empower, motivate and inspire."

“We gave the employees last Friday off so we could rebrand the shop and then welcomed them into our new house today,” said Marks.

"I intentionally wanted all the employees to walk into the shop together as one team. It was cool to watch their faces. Their reactions were priceless.”

Marks purchased the NASCAR assets of Chip Ganassi Racing in June and took over the race shop last week. Monday was the first official day of the rebranding.

Employees enjoyed coffee and donuts before walking onto the main floor for the first time then collecting their new Trackhouse clothing. After lots of pictures two food trucks fed the organization lunch.

Trackhouse will field the No. 1 Chevrolet Camaro for Chastain and the No. 99 Chevrolet Camaro for Suárez in the 2022 season. Both drivers tested the new Next Gen car at Charlotte Motor Speedway last week and will compete in the non-points, invitational Clash at the Los Angeles Coliseum on Feb. 6.