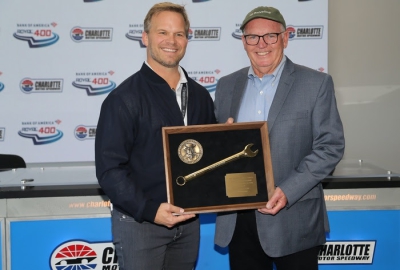 A championship-winning crew chief and transformative NASCAR executive whose career in motorsports has spanned more than 50 years, Gary Nelson received the prestigious Smokey Yunick Award ahead of Sunday’s fourth running of the Bank of America ROVAL™ 400 at Charlotte Motor Speedway.

Legendary car owner and mechanic Henry “Smokey” Yunick instituted the award in 1997 to annually recognize an individual who rose from humble beginnings to make a major impact on the motorsports industry. Yunick passed away on May 9, 2001, and Charlotte Motor Speedway has continued the award in his memory.

“Smokey was a friend and I always admired his innovation, and patterned myself in thinking outside the box like he did,” Nelson said. “I always start every week wanting to win a trophy and I got a trophy today, so I’m good. It’s great to receive this.”

A native of Elgin, Illinois, Nelson scored 21 wins in an accomplished career as a NASCAR Cup Series crew chief from 1973-’91, managing strategy for prominent drivers including Darrell Waltrip, Bobby Allison, Ricky Rudd, Geoff Bodine and Kyle Petty. The pairing of two innovative minds in Nelson and Allison saw DiGard Racing take the sport by storm in the early 1980s.

The duo captured victories in the Daytona 500 and the Coca-Cola 600 in 1982, one year before DiGard’s No. 22 machine – piloted by Allison and wrenched by Nelson – claimed the NASCAR Cup Series championship in 1983.

Following a three-year tenure with Allison and DiGard which included 16 victories, Nelson developed a reputation for building race-winning teams from the ground up. Ambitious new team owner Rick Hendrick tapped Nelson and driver Geoff Bodine to guide half of Hendrick’s first multi-car effort in 1986, a project which met with immediate success when the pair won the Daytona 500 in their first try.

In 1988, Felix Sabates hired Nelson to develop a new team, SABCO Racing, with driver Kyle Petty – which went from missing the Daytona 500 in 1989 to winning two races in the next two seasons.

In 1992, Nelson left the team side of the industry and assumed the role of NASCAR Cup Series director, where he served for more than a decade before being named vice president of research and development. In that role, Nelson focused his efforts on improving safety in motorsports.

Today, Nelson is the founder of Gary Nelson & Associates, which manages a variety of race teams from motorcycles to IMSA.