Should Talladega and All Playoff Tracks Have Lights? Featured 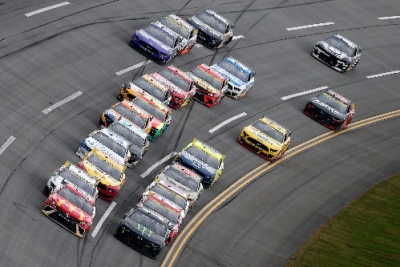 After last weekend's trip to Talladega, 2 out of its 3 races were affected by both darkness and rain on the racetrack. That made all of us race fans ponder the question, “ Why don’t they put lights around the track?”. Well let's dive in on this topic and see what we can figure out.

Excluding road courses, there are only 5 race tracks on the NASCAR Cup Series schedule that do not have lights: Talladega, Pocono, Michigan, New Hampshire, and Dover. Dover can not install lights due to an Air Force base located near the racetrack and New Hampshire isn’t allowed due to local government rules. The only one that is currently in the Playoffs is Talladega Superspeedway. With the report that NASCAR is wanting to shuffle the Playoffs in future seasons, I think we can all say that Talladega won't be leaving the playoffs anytime soon. And why should it? It is definitely a ticket seller with its chaotic style of racing. But 2 races out of 3 years have been pushed to Monday afternoon due to inclement weather. So is it time to add in lights?

To me, yes, I think it's time we have lights put up at the 2.667 mile racetrack in Central Alabama.

It's a crying shame that Talladega has to suffer if weather is in the area or if darkness is looming in. Now let's clear this up, I do not want Talladega to schedule a night race. If you've been following NASCAR since the mid 2000’s, you know that back then nearly one third of the schedule was run on a Saturday night. I wouldn’t want to take a good Sunday afternoon race from Talladega, however I would much rather run it late into Sunday night rather than half of the fans in NASCAR missing out due to work, school, and other commitments.

I’ve heard contrasting opinions about the nightlife in Talladega and how it would be lost. Well let's say you were in the infield with a camper or RV. Would you rather lose one night of partying or have to leave on race day Monday morning because you can not take off work? Racetracks need to think about the fans' visit and prioritize on not letting the casual race fan walk out the gates. If they have spent all of their hard earned money on your sporting event and you have to tell them that they have to come back the next day, they may never come back. So yes, Talladega needs to do this. And I hope all other race tracks that can install a lighting system, will.