You Want Passing? No Other Race Track Provides as Much for the Lead, for Wins, and Throughout the Field During an Event Like Talladega Superspeedway 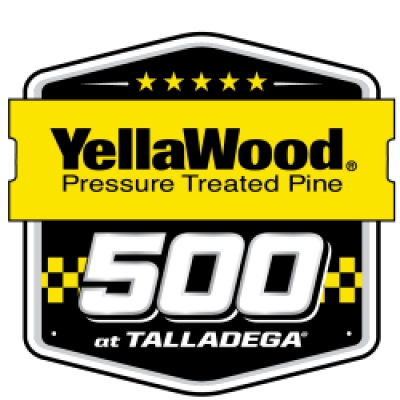 Talladega Superspeedway, which hosts the YellaWood 500 this Sunday, Oct. 3, NASCAR’s Most Competitive track, and the biggest, baddest race track on the planet - period. The numbers show it.

Let’s look at some staggering facts to showcase how Bill France’s creation has provided some of the most thrilling racing and battles for the lead in all of motorsports for more than 50 years with three- and four-wide, nail-biting, 200 mph action.

Editor’s Note: For all up-to-date Race Weekend logos, open link here. For B-Roll of last year’s YellaWood 500 open: Talladega October 2020. For B-roll of the GEICO 500 this past April, open  here.

Official Lead Changes at the Start-Finish Line
Official lead changes in NASCAR are counted at the start-finish line, and Talladega Superspeedway owns the NASCAR record – 88 (twice - in spring of 2010 and 2011). Incredibly, that is for just a 188-lap event (since the venue is a mammoth 2.66-miles which makes up 500 miles).

Green Flag Passes for the Lead
True, NASCAR counts lead changes at the start-finish line, but Talladega Superspeedway, 33-degree of banking provides passing opportunities throughout the 48-feet wide ribbon of asphalt of its four turns and tri-oval. Over the last 15 seasons, ’Dega has averaged more than 115 green flag passes for the top spot during its 500-mile events. The high mark came in 2016 when there were 213 exchanges of the lead! Second on the list is the iconic Daytona International Speedway with 82 with Charlotte Motor Speedway third with just over 28.

Total Green Passes Throughout the Field During a Talladega 500-miler
Talk about an astounding stat! Over the last 15 seasons, Talladega Superspeedway, which France, Sr., called the “greatest race track in the world,” has averaged more than 12,600 green flag passes throughout the field during its NASCAR Cup Series races. No wonder when fans purchase a seat at Talladega, they rarely sit it since they are standing with excitement.

White Flag Leader Doesn’t Mean Winner at Checkered Flag
As noted earlier, lead changes are counted at the start-finish line in NASCAR. Unbelievably, since Talladega began racing the Cup Series in 1969, in 54 races, an official lead change happened on the last lap in 29 races - the driver who took the white flag didn’t bring home the checkered flag. The trend started in 1974 and continued in April when Brad Keselowski captured the GEICO 500 for is sixth Talladega triumph. Here’s the rest:

Oh, Those Close, Blink-of-an-Eye Finishes at ’Dega
With so much passing at Talladega, naturally it contributes to the incredible close finishes, again, like no other venue. During the last 25 years at NASCAR’s biggest track that didn’t end under caution, the average margin of victory is .129 second, most of time with multiple cars gunning for the win. The closest? Jimmie Johnson over Clint Bowyer by .002 seconds in 2011.

Here is an unbelievable stat. Add the total margin of victory times together in each Cup race over the last 25 years (38 races) at Talladega that didn’t finish under caution. The grand total is 4.905 seconds. Yes, it is true!

The most competitive track in the world continues another chapter in its storied history this weekend with the YellaWood 500 (1:00 p.m. CDT start), the culmination of a tripleheader NASCAR Playoffs weekend. Saturday features a duo of races on Saturday, Oct. 2 with the Sparks 300 for the NASCAR Xfinity Series and the Chevy Silverado 250 for the NASCAR Camping World Truck Series. The action begins at Noon CDT.

Admission to the traditional Saturday Night Infield Concert, headlined by platinum-selling Dustin Lunch, is FREE to all infield guests, who purchases a ticket to the YellaWood 500. To see all admission options, including the Talladega Garage Experience (includes access to Garage Viewing Walkways, Pre-Race Ceremonies on Sunday and Ruoff Mortgage Victory Lane), visit www.talladegasuperspeedway.com or call 1-877-Go2-DEGA.

Fans are encouraged to keep up with all the happenings at the biggest, baddest race track on the planet by following Talladega Superspeedway on Twitter, Facebook and Instagram.