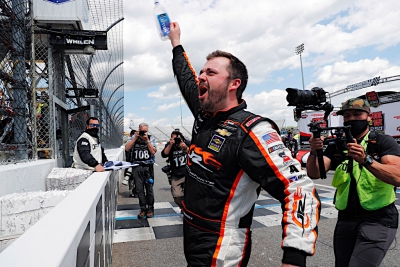 Perhaps one of the hottest names in the NASCAR garage right now is all-time CARS Late Model Stock Tour winner, Josh Berry. The late model driver, who has been competing for multiple years behind the wheel of a Late Model Stock for team owner Dale Earnhardt Jr., finally got his big break to compete in the Xfinity Series for JR Motorsports in 2021.

Berry, the short track racer, made the most of the opportunity and scored his first NASCAR national series win at the half-mile track that is Martinsville Speedway on April 9th. The win couldn’t have come at a more perfect place. Martinsville hosts the largest attended Late Model Stock Car race annually, a race Berry won in 2019 which was the last time the race was held.

Now Berry will turn his attention to winning at another short track.

Berry and his team will compete in the series largest Super Late Model event of the season which will award $20,000 to the race winner. Super Late Model competitors will arrive from the west coast to the East coast. California competitor Jeremy Doss, along with eastern seaboard of New Hampshire competitor Derek Griffith, will be attendance. The diversity and talent level that will assemble for the 200 lap race will be just as tough - if not tougher to win than that of a NASCAR race, according to Berry.

“There’s no question about the talent that will be in the field for this race. I’ve raced against some strong fields with the CARS Tour Late Model Stocks, and this super field that will be at Jennerstown stacks up with one of the best. Racing at the short track level is hard to win races, especially when you show up to a big event like this one. I wouldn’t say one is harder than the other because each race presents its own challenges, but I know with this one I’ll have my work cut out for me if I’m going to run up front.”

Even though Berry holds the record for most all-time wins, monies earned, and poles in the Late Model Stock Car division, the Mooresville, North Carolina driver has made just three starts behind the wheel of a Super Late Model.

According to Berry, the lack of seat time behind the wheel of a Super Late Model doesn’t affect his chances of going up against a plethora of the best Super Late Model drivers in the country at a track he’s never even seen.

“Super Late Model racing is not something I have a lot of experience in, but I’m excited for the challenge. I’ve adapted to racing at a lot of tracks I haven’t seen this season, whether it was Daytona, or coming to a place like Jennerstown. I like our chances come July 3rd. I think we’ve got good team, and we plan on doing some testing beforehand, so I’m looking forward to getting back short track racing with these guys,” explained Berry.

Tickets for the American Freedom 300 at Jennerstown Speedway Complex are currently on sale by visiting www.carsracingtour.com. Tickets are $20 in advance and $25 at the gate for adults thirteen and older. Fans can also take advantage of a ticket and event t-shirt combo for just $35 in advance only.

For additional information on the CARS Late Model Stock Tour and the CARS Super Late Model Tour, visit www.carsracingtour.com. Be sure to stay active and social with the tour by liking “CARS Tour” on Facebook, following @CARSTour on Twitter, and scrolling through photos on Instagram cars_tour. Additional series information can be obtained by calling the CARS Tour series office located in Mooresville, NC, at 704.662.9212.