Different Car No Problem for Justin Sanders as He Grabs Win No.7 at Ocean Speedway 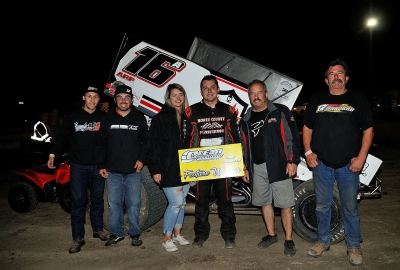 Driving the Larry Antaya Motorsports No.16, Justin Sanders stormed to his seventh victory of the 2021 Ocean Sprints presented by Taco Bravo season on Friday night in Watsonville. The win sets up Sanders with a 52-point advantage in the series before he journeys north for the ASCS National races in Washington next weekend.

“Yeah we were pretty good. The only thing where I think we struggled was off of four,” Sanders said. “You can never count anybody out. Joey (Ancona) was pretty good. He threw some moves at me and it was fun racing with him.”

Sanders started outside Pombo for the 30-lap feature and immediately took over the lead. He encountered lapped traffic by lap five but earned a reprieve when Nick Ringo of Morgan Hill stopped on the front stretch for a lap seven caution. Ancona tried to slide Sanders in turn three on the restart, but Sanders crossed underneath him to maintain the lead. Sanders again approached slower traffic by lap 12.

The leaders lined up on the high line around the speedway with Ancona diving underneath Sanders to show him a nose on lap 13. Ancona hung in lockstep with Sanders in traffic before he went over the edge in turn four on lap 22. Mitchell Faccinto of Hanford grabbed second as Ancona slowed into turn one. Ancona limped to the pits while on the backstretch, Jason Chisum and J.J. Ringo collided with Chisum flipping for a red flag.

Sanders drove ahead of Faccinto over the final seven laps for the victory while Bud Kaeding made several maneuvers to advance to third at the checkered flag. Castro Valley’s Jake Andreotti was fourth with Pombo rounding out the top-five.

A caution flew on lap ten with Cody Bryan spinning in turn two. 15-year-old Andrew Pearce started ninth but charged up to second on the restart. Pearce ran closely behind Bannister the rest of the way. San Jose’s Randy Miller slipped as low as seventh but recovered to finish third at the checkered flag. Campanile ran fourth ahead of Jason Bannister.

Hobby Stocks entertained with a three-wide duel to the checkered flag in their 20-lap event, with the win eventually being awarded to Jerry Skelton of Watsonville. Merced’s Chad Ragsdale led by a nose in a side-by-side battle with Skelton on the first two laps, before Skelton led lap three. Skelton cleared Ragsdale on lap four. Watsonville’s Sam Kennedy had a dangerous spin on the front stretch that brought out the yellow flag on lap five.

Ninth starting TJ Etchinson III entered the picture as he drove into the third spot on the restart. He ran side-by-side with Skelton, eventually being credited with lap ten in the lead. A caution on lap 12 gave Skelton a shot to retake the top position on the outside, leading lap 14. Etchinson drove back to the inside of Skelton to lead lap 15 and the pair remained alongside of each other for the final five laps.

On the final circuit, Joe Gallaher stuck his nose in between them for a three-wide run across the finish line. Etchinson won by mere inches, but the finish was nullified by a post-race disqualification. Skelton was credited with victory over Joe Gallaher, Ragsdale, twelfth starting Rob Gallaher, and Norm Ayers of Corralitos.

Ocean Sprints presented by Taco Bravo charge right back to Watsonville this upcoming Friday along with IMCA Sport Mods, Four Bangers, Western Midget Racing, and South Bay Dwarf Cars. Tickets are available at www.OceanSpeedway.com or at the gate.