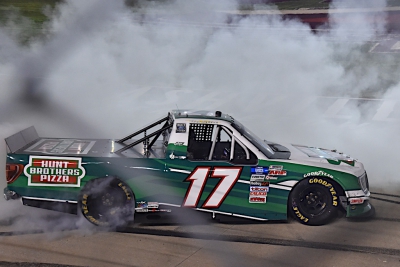 The first time was the charm for Ryan Preece.

Preece, driving the No. 17 Ford for Team DGR, outdueled David’s son Todd and Grant Enfinger in the final laps to earn the win.

“This truck was awesome," said Preece, who led eight laps, including the final seven. "I know I was aggressive and pulled some big blocks. Just super proud of this opportunity. You don’t get them very often so you have to take advantage of it.”

The "Rackley Roofing 200" was the first NASCAR event at Nashville Superspeedway since July 2011.

Preece, who has made 93 starts in the NASCAR Cup Series across four seasons, was sixth after Stage 1 and 10th after Stage 2, but made his way up through the field to be in contention in the race’s final stretch.

With Enfinger in the lead, Preece finally reached his back bumper and the two engaged in a spirited side-by-side battle for several laps and exchanged paint once or twice before Preece finally emerged with the advantage.

“It was fun running with him,” said Enfinger, who finished third after leading 39 laps. “It was extremely tough racing out there. We had a good truck, just not enough to hold of those [fresher] tires at the end.”

“I never quit and never give up,” Preece said. “We were able to get back by him and pull away. It was a real team effort.”

Fellow NASCAR Cup Series driver William Byron, making his first Truck Series start since 2016, was running inside top 10 when he suffered engine trouble that ended his race. He finished last in the 36-truck field.

“We had a couple times where it stumbled and I thought it was the wind on the backstretch,” said Byron of his engine. “It was going to be a pretty good day. We’ll learn from this and move on.”

Stage 1 winner Derek Kraus and Stage 2 winner Chandler Smith tied for the lead in total laps led with 48 apiece. Kraus, who also won the pole position earlier on Friday, ended up 35th after a hard crash in Turn 3 on Lap 111, while Smith placed 13th.

Rate this item
(0 votes)
Tweet
« Pursley Holds Off Kofoid In POWRi Thriller At Lincoln Speedway Different Car No Problem for Justin Sanders as He Grabs Win No.7 at Ocean Speedway »