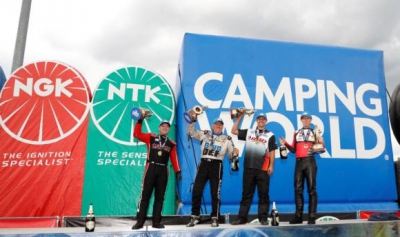 Force finished the job in front of a captivated crowd, snaring his 152nd career Funny Car win and dedicating the win to Smith, the executive chairman of Speedway Motorsports and founder of zMAX Dragway.

"I love Bruton and I ran my big mouth this weekend. I told him, 'I can do this, I'm going to win this race for you," said Force, whose 3.916-second, 328.78-mile-per-hour pass beat all comers in the final quad. "I love this guy and everything he’s done for this sport. … This just makes me so proud. You never tell Bruton Smith you're going to do something and then you don't do it. I tried to backpedal – I mean, these kids out here are so competitive and you never know how good you'll be, but I'm excited I get to send this (trophy) home to somebody I love – a guy who built our sport."

Force's victory wasn't the only monumental one on Sunday. Defending Top Fuel champion Steve Torrence used a 3.716-second, 329.10-mph pass in the final round to claim his fifth consecutive win at zMAX Dragway, and boosting his four-wide record to an incredible six wins in seven tries, including four consecutive at zMAX Dragway.

"(The win streak) really adds pressure to me," Torrence said. "It keeps building. … It was a great race day. Everybody continues to put pressure on us to do well at the Four-Wide. We do really well at it and I don't know why, but I want to keep doing it. I feel like it's the only place where I have a winning record."

Pro Stock driver Dallas Glenn of nearby Mooresville, North Carolina, corralled the first win of his career as a driver after a 6.54-second, 209.88-mph pass. Glenn spent years as a crew member for KB Racing, but winning as a driver added a new layer of magnitude.

"Standing from the outside (with the crew), you can always see all the little things," Glenn said. "Driving it is so much harder. To be honest, it hasn’t really hit me yet. I'm trying to just soak everything up. I've been on KB Racing for a bunch of them and we've had a lot of success, but this is a whole, new perspective for me. My wife does my public relations for free. I've got to start paying her now."

Pro Stock Motorcycle driver Steve Johnson won his first Wally since 2014, riding a 198.03-mph, 6.729-second pass in the final round to edge Matt Smith by 72 ten-thousandths of a second.

"When you have a career path, you have some kind of a goal and when you reach that goal, it's euphoric," Johnson said. "This is the most special win for me."