From Strider Glides to Wheelies and Whips, Sophie Gregory Takes the Biking World by Storm 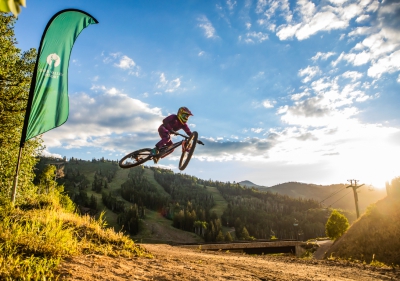 A 12-year-old from Utah is making some serious waves on two wheels when it comes to competitive racing. Sophie Gregory is a seventh grader who is already a two-time National Champion in downhill mountain biking.

However, Sophie didn’t earn these accolades overnight. She’s been riding since she was a toddler.

Sam Gregory, Sophie’s father, purchased a yellow Strider Bike for his daughter when she was only four years old. “We were drawn to Strider because of the awesome color options,” explained Sam. “And because they last forever.”

That simple purchase was the foundation for a lifelong love of riding.

In 2016, Sophie competed at the Strider Cup in Salt Lake City. It was her first race ever. She took 3rd place, and earned her first trophy.

After that race, she was hooked.

Now, years later, Sophie has graduated from cruising on her tiny Strider Bike to pushing the limits on two wheels any way she can. “I love doing big whips and tables on jumps,” said Sophie. “I also started landing suicide no-handers.”

It’s fair to say that Sophie is fearless, which is a necessity in this type of sport. “It’s very nerve wracking waiting at the bottom of a Downhill course,” said Sam. “Especially on the races where the courses are dangerous or especially difficult.”

Sophie’s proudest biking moment was when she won nationals at Trestle Bike Park. This extraordinary middle schooler is currently sponsored by Transition Bikes, DHaRCO, FOX, and Maxxis Tires. Sophie was even featured in a movie called ‘Esperanto,’ which can be viewed on Amazon Prime and Apple TV. The film shows that no matter where you’re from, what language you speak, or what gender you are, everyone can bond through biking. Her ultimate goal is to race in the Downhill World Cup when she’s old enough.

Although she has big aspirations, she still treasures the simple moments like chowing down on a Slim Jim Beef Stick after a fun day of shredding with her dad and brother in Deer Valley.

“When I am riding my bike, I feel free,” said Sophie. “I feel like I am a bird flying through the air with nothing to worry about.”

We agree, Sophie. And honestly, it doesn’t get any better than that.