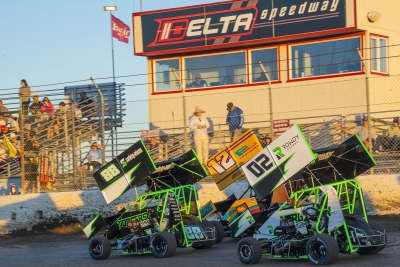 Torgerson Racing of Medford, Oregon, comprised of brothers Ashton and Austin Torgerson, completed their 2022 season with 45 victories, a sweep of the track championships at Dixon Speedway, and a Non-Wing championship at Keller Auto Raceway Plaza Park. The outstanding season saw Ashton Torgerson accumulate 35 victories in the No. 02 Rowdy Energy Micro Sprint while older brother Austin scored ten triumphs in the Safety-Kleen No. 88.

Ashton Torgerson season started off hot with a pair of Adobe Mountain Speedway wins in Glendale, Ariz. and his tenth win of the season arrived by May 6 at Plaza Park. The wins continued throughout the summer months with a total of six Dixon Speedway race night sweeps where he took home the trophy in both the Super 600 and Non-Wing Micro Sprint divisions.

Following first and third place finishes during the Hagopian Memorial weekend in September in Non-Wing Micro Sprints, Torgerson began his ascent into the 360 Sprint Car scene. Driving the No. 02 Eagle Chassis 360, Torgerson ran 12th in the B-Main in the Rowdy Energy backed machine at the Tyler Wolf Memorial during the Fall Nationals in Chico. He followed that performance in October with a strong Trophy Cup debut. The weekend of solid runs included a standout heat race win on Saturday night of Trophy Cup against a field littered with champions. His October also included Non-Wing Micro Sprint wins during the Cal Cup and the Lonnie Kaiser Memorial.

He added two starts at Merced Speedway in Winged 360 Sprint Car competition in November with a best finish of 13th.

Austin Torgerson stayed busy as well across his 110 starts across the west. He scored a pair of Adobe Mountain triumphs early in the season including the Friday night winged Micro Sprint portion of the Todd Damron Memorial and the Friday night Non-Wing Corby’s Clash at Plaza Park. He earned a Dixon Speedway Saturday night sweep himself, winning both the Super 600 and Non-Wing features on May 14.

Austin closed his 2022 season with a third-place effort in the Tribute to Billy Shuman after starting 15th.