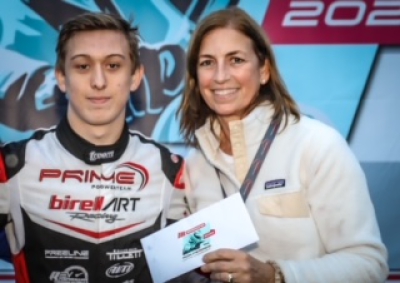 Scholarship recipients are being announced for the upcoming joint venture between Radford Racing School and the Formula 4 United States Championship Powered by Honda (F4 U.S.) to help transition young drivers from go-karts to racecars. Patrick Woods-Toth is the first driver to be announced to the Radford Racing School F4 U.S. Scholarship Award School through a nomination from the Motomaster Ron Fellows Karting Championship.

“The Motomaster Ron Fellows Karting Championship is thrilled to have one of its deserving kart drivers chosen to be included in the scholarship provided by Formula 4 U.S. Championship Powered by Honda,” said Ron Fellows. “Patrick Woods-Toth is a terrific talent and we’re excited to help provide him this three-day opportunity to drive an F4 car at the Radford Racing School.”

“I am as excited as I am grateful to have been chosen for this opportunity,” said Woods-Toth. “A lot of hard work and dedication has come together preparing me for an opportunity like this one. I am so thankful to everyone who made this possible, and I am looking forward to making the most of it.”

Scheduled for December 2-3, Radford Racing School’s F4 U.S. program is designed to help scholarship winners transition from karts to racecars. Motomaster Ron Fellows Karting Championship will also provide Woods-Toth with the optional third day of school, lapping day, on December 4. Nominated by some of the world’s best karting programs, scholarship recipients will travel to Radford’s facility in Chandler, Ariz., to participate in the program that utilizes the same combination that F4 U.S. uses in competition—a Ligier JS F4-16 chassis, a Honda 2.0-liter engine and Hankook tires. With ground school, skid control, lead-follow sessions, braking, shifting and handling drills, the program is uniquely designed to account for the fact that participants are some of the top karters in the world.

Additional details about the school, including more scholarship recipients, will be announced in the upcoming weeks.