Michael Schumacher is the most successful Formula One Champion, study reveals 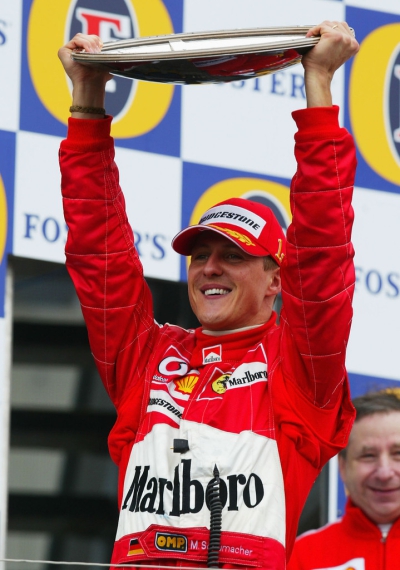 Michael Schumacher is the most successful Formula One World Champion ever, a new study has revealed.

The study by independent online casino comparison service CasinoAlpha analysed every Formula One Championships since 2000 and calculated when each winner mathematically won the title and with how many points. Then it adjusted all the results to today’s scoring system minus the newly introduced Fastest Lap point to find out the combination of the fastest win with the most points.

Michael Schumacher had the fastest win ever in 2002, as the drivers were only 65% into the championship when he accumulated enough pole positions and overall points to be mathematically crowned World Champion for the fifth time in his career. The 2002 championship featured 17 races, and based on the points system of that year, he arrived at the 11th race with 96 points, which allowed him to secure the title. By the end of the season, Schumacher had 144 points, which adjusted to today’s system is equivalent to 380 points in 2022, the highest in the list.

Schumacher occupies the whole top three fastest victories, his 2001 title comes in second place and his 2004 title comes in third place. In 2001, the German driver mathematically won at the 13th race out of 17 with 94 points up until that moment, which by the end of the season were 327 when adjusted to today’s system. Similarly, in 2004, Schumacher secured the title at the end of the 14th race out of 18 and a total of 367 modern day points.

Second driver on the list but fourth overall is Sebastian Vettel, who in 2011 secured his second of four titles at the end of the 15th race out of 19, 79% into the championship. By the end of the season, Vettel had accumulated 392 points based on the modern scoring system and he became the youngest driver to ever win two consecutive World Championships. Vettel also occupies the sixth place for his 2013 victory.

Lewis Hamilton comes in fifth, securing his 2020 world championship 82% into the season, at the 14th race out of 17. Hamilton also occupies the seventh, ninth and tenth place for his 2015, 2017 and 2018 victories respectively.

The only other driver on the list is Fernando Alonso, who managed to secure his 2005 title 89% into the championship, during the 17th race out of 19.

A spokesperson for CasinoAlpha commented on the findings: “The data shows that out of the 72 complete Formula 1 seasons so far, 33 were decided in the final race, and of the remaining 39, 10 were decided in the penultimate race. These figures show which racers were driving so well that they were able to wrap the title up with several races still remaining.

“Michael Schumacher’s name appears three times in the top ten, really highlighting just how dominant he was. His eight championship victories already make him many people’s greatest ever driver, and this data strengthens their case – being able to secure the title so early in multiple seasons is another impressive achievement to add to Schumacher’s already long list.”

The study was conducted by CasinoAlpha, a website that offers informative pages free of charge to educate the United Kingdom customer to make wiser financial decisions.