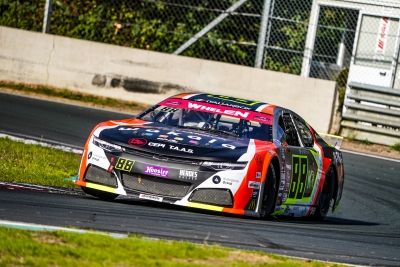 A season-long comeback completed in the most difficult weekend. At the end of the fifth NASCAR Whelen Euro Series round, hosted by Zolder Circuit, Max Lanza returned on the top of the Challenger Trophy standings, ready for the final attack to the title at Grobnik in two weeks.

In Belgium, Max Lanza looked to score solid points in a weekend made tricky by the rain and the bagarre on track. In the qualifying session, the Italian driver was penalized by the slippery track that did not allow him to complete an entire flying lap, sending him to the 8th row on the grid. In Race 1, Lanza was slowed by a race accident that kept him far from the Top10, while in Race 2 the chaos in Turn 1 - which caused the third safety car of the race - pushed him out once again from the Top10:  "It was a very difficult weekend, staying focused is not easy when everything seems to be going wrong. We did not give up and we kept our mind to the goal, even if sometimes we had to sacrifice the pure performance. We have monitored our rivals and at the end we were right: we came back to the lead of the Challenger Trophy!" commented Lanza, forced to litter the first position in the trophy after Brands Hatch, when he was forced to skip the races by medical staff due a minor illness. "It was a long and complicated season that gave us lots of positive things. Now we have to stay focused on Grobnik and its two races with double points. It'a gamble and nothing can go wrong, we must be simply perfect, we have to do what we know and we showed we know how to do. Fingers crossed! We completed a fantastic comeback, we need to do 'just' the final step."

The 2022 EuroNASCAR finals will be hosted by Grobnik Autodrome in 15 days. The Croatian round will give to all the fans two epic races with double points, everything can still happen!