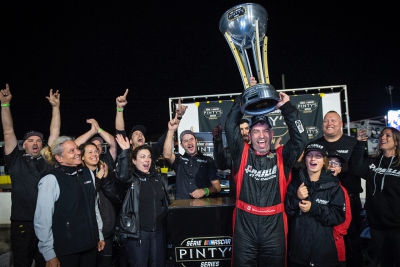 Marc-Antoine Camirand became the 2022 NASCAR Pinty’s series champion, Sunday, as the season finale was presented at Delaware Speedway, near London, ON. For the last race of this season, Camirand was involved in a late-race incident and finished ninth in the Pinty’s Fall Brawl, while Andrew Ranger was involved in a major pileup.

Entering the last race with a comfortable lead in the standings, Camirand won his first NASCAR Pinty’s championship on the first year of the newly formed Paillé Course//Racing team, with cars built at his own Camirand Performance shop.

“I just can’t really believe it yet. It’s has been a long journey from building those cars from scratch to winning the title. We all worked so hard to achieve this. I can’t thank enough my team and the whole GM Paillé family. They made this dream come true,” stated Camirand.

On Sunday, Camirand barely survived the last laps of the 250-lap race, but only had to take the green flag to secure his first title. After avoiding the Big One late in the race, he was involved in another hard contact with only a few laps to go. With a severed rear-end, he dropped many positions after the restart with four laps to go but remained on the lead lap. He scored a 9th place finish.

His Paillé Course//Racing Andrew Ranger showed great speed from the beginning of the day. Sixth in practice and seventh on the starting grid, he knew that his car could be good on the long run.

Ranger was having a good pace, running into the top-10 and fighting great battles throughout the race. However, his race ended brutally when the Big One happened late in the race.

After other cars in front of him collided, he couldn’t avoid the contact, collected the car in front of him and went over the other car, ending his 2022 campaign with heavy damage to his GM Paillé/Chevrolet Canada n°27 Camaro.

“This is one of the biggest crashs of my career. It’s definitely not the way we wanted to end the season, but there is nothing I could do to avoid this. This is part of racing. And I’m very happy for Marc-Antoine and my whole Paillé Course//Racing team for their championship”, said Ranger.