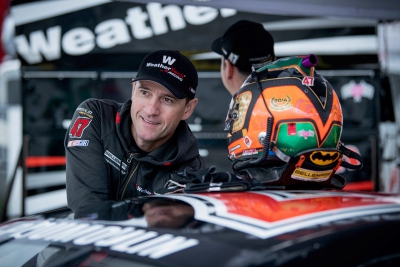 The Pinty's Fall Brawl, the last race of the 2022 season in the NASCAR Pinty's Series, was an action-packed event for Louis-Philippe Dumoulin and the #47 WeatherTech Canada | Groupe Bellemare team. The 250-lap event at Delaware Speedway was full of challenges that the Dumoulin Competition team and driver overcame with determination and efficiency throughout the event to finish 8th.

In the morning practice session on the ½ mile oval, Louis-Philippe Dumoulin kept himself well within the pack of local racers by setting the 12th best time. "We tried several different settings during the practice session," explained the driver. "I was happy with the car, although the track has changed since last year and the grip level is different."

In qualifying, a mechanical problem thwarted the plans of the Trois-Rivières driver who finally finished 20th. "The engine was losing power," said Louis-Philippe Dumoulin after the session. "We suspect that a spark plug wire was badly connected. The team worked hard to reinstall the errant wire correctly and prevent a repetition of the failure during the race."

The start was delayed by more than an hour due to a short shower that soaked the track. The delay meant the 250 laps were run on a dry track. The race included several caution periods and Louis-Philippe Dumoulin used the restarts to his advantage to move up the field in his typical methodical way to an 8th-place finish.

"We worked hard to get back up to eighth," said the driver of the #47 WeatherTech Canada | Groupe Bellemare car. We had some issues with the car that were out of our control. The team was effective in the mid-race pit stop, enough to actually improve our position at a time when passing was still difficult with the heavy traffic."

He continued, "On the track, we were aggressive to make sure that we would be on the quicker side for the restarts. It was an action-packed event, so I'm happy with our comeback and with finishing 8th out of the 27 cars on the busy track during the race."

"Since the track had just been repaved, we now have a better idea of the set-up for next year. Delaware Speedway is a long drive from our shop if we want to go there to test before an event, and I hope to be able to come back there and put our learning into practice."

Having not tested before the event, Louis-Philippe Dumoulin was at a slight disadvantage against the local drivers, some of whom had even raced the day to validate some of the subtleties of the track.

The 2022 season concludes with an up and down race that brought the #47 WeatherTech Canada | Groupe Bellemare team closer together as they all worked hard to correct a critical wiring issue, execute a near-perfect pit stop and prepared a car that allowed to improve by 14 positions during the race.

Thanks To All of You

As the 2022 season comes to an end, let us also express our gratitude to our partners, friends, team members and all our families, as well as our supporters and the media who continue to encourage us and believe that we can reach our goals.

We are convinced that we will come back even stronger in 2023, with new projects, because like all of you, "Passion - Performance - Partnerships" drives us day after day.