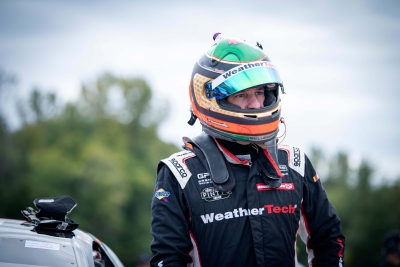 The Pinty's Fall Brawl, held this Sunday, September 25, at Delaware Speedway, is the last chance this season for Louis-Philippe Dumoulin to score a race win. The NASCAR Pinty's Series will conclude its 2022 schedule on the paved half-mile Ontario oval, which is a two-hour drive West of Toronto, near London, Ontario.

Louis-Philippe Dumoulin and the #47 WeatherTech Canada | Groupe Bellemare team are shooting for nothing less than a win to close out the year on a positive note. “This is our last race of the season and I'm looking forward to returning to Delaware,” said the driver of the #47 WeatherTech Canada | Groupe Bellemare car. “It's a track that I really like because it's fast, we can run side-by-side and it's been repaved. It will be a fun race for the spectators as well as for the drivers.”

Last year, the series held three races at Delaware Speedway to close out the season and determine the 2021 season champion. In the end, Louis-Philippe Dumoulin used an effective strategy throughout the weekend and that won him his third NASCAR Pinty's championship.

Looking back on his 2022 season, the veteran driver says, “We went through a lot of changes over this past season. NASCAR added a race on a dirt track, visited Newfoundland and Labrador for another new event, all that over a season of ups and downs for our team.”

“I am happy with the work of the #47 WeatherTech Canada | Groupe Bellemare team, as we had a new crew chief, and we are still learning to work together. With a longer season, we would have had the opportunity to race more often and do well, such as we did in Toronto and at the Canadian Tire Motorsport Park this year. But for now, we must focus on the last oval event of the season,” added Louis-Philippe Dumoulin.

The Pinty's Fall Brawl will start at 4:30 p.m. ET on Sunday, September 25. The season finale will be broadcast live on the TSN app or FloRacing.