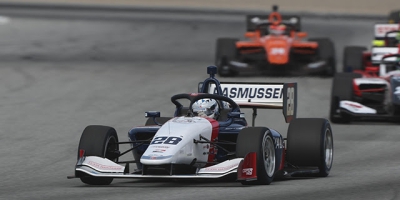 Christian Rasmussen finished his rookie season with a flag-to-flag victory in the Indy Lights Grand Prix of Monterey Race 2 on Sunday at WeatherTech Raceway Laguna Seca.

Rasmussen, from Denmark, earned his second victory of the Indy Lights Presented by Cooper Tires season in the No. 28 Road to Indy/Stellrecht entry fielded by Andretti Autosport. He started from the pole and led all 35 laps after finishing second in the first race of the weekend doubleheader Saturday.

Rasmussen entered the 2022 Indy Lights season after winning the Cooper Tires USF2000 Championship in 2020 and the Indy Pro 2000 Presented by Cooper Tires title in 2021. His other victory this season came in June at Road America.

“We’re looking to come back next year,” Rasmussen said. “Hopefully we can continue on what we ended on here and hopefully compete for a championship next year.”

Sting Ray Robb finished second today, .8893 of a second behind teammate Rasmussen, in the No. 2 Sekady car to complete a strong final weekend of the season. Robb earned his first career victory Saturday.

Matthew Brabham completed a podium sweep for Andretti Autosport in the team’s No. 83 car, passing 2022 season champion Linus Lundqvist for that spot with a brave, side-by-side move in the famous “Corkscrew” turn on Lap 4.

Lundqvist celebrated his first full day as an Indy Lights champion by finishing fourth in the No. 26 HMD Motorsports with Dale Coyne Racing car. Swedish driver Lundqvist clinched the title by finishing sixth Saturday and ended up with a 575-483 edge over runner-up Robb in the final standings.

Jacob Abel finished fifth in the No. 51 Abel Speedwagon car, backing up the fourth-place finish Saturday that tied his career best in the series.

Hunter McElrea finished seventh to clinch the series’ Rookie of the Year title despite problems with the push-to-pass system in his No. 27 Andretti Autosport entry. McElrea ended up fourth in the standings with 460 points, 20 ahead of rookie runner-up Rasmussen.

Rasmussen squirted ahead of the field at the start and controlled the gap to Robb, who started third, for the entire race. The margin between the two drivers varied from .6 of a second to about 1.2 seconds throughout the race, usually hovering around the one-second mark.

Robb tried to make a final charge on the last lap around the 11-turn, 2.238-mile road course, but Rasmussen kept his nerve and his speed for victory.