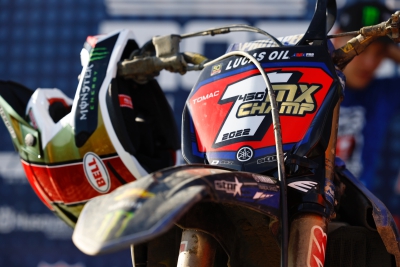 Rekluse’s relationship with the Star Racing team dates back to the off-season of 2015 where Rekluse product testing led into running it full-time throughout the races beginning with the 2016 Supercross season. Since then, this technical partnership has not only helped fine-tune TorqDrive technology, but has amassed over 10 championships.

Despite those Pro Motocross wins plus another six podium finishes, Tomac entered the final round at Fox Raceway only one point ahead of Honda HRC’s Chase Sexton, seemingly one of the few riders capable of consistently matching his pace throughout the season. Tomac put in a veteran ride in the very critical first moto, which led him to build on that momentum with another win the second moto. This 1-1 performance on the day was more than enough to make him the 2022 Lucas Oil AMA Pro Motocorss 450 Champion, an iconic closing to an iconic season.

The Pro Motocross circuit sees varying types of track and weather conditions, all the way up to extreme heat surpassing 100°F during the Fox Raceway finale. Regardless, Eli Tomac and his Star Yamaha machine relied on Rekluse Core Manual TorqDrive to get its massive power to the ground, and to do it consistently, resisting fade and slipping.

Rekluse Core components, consisting of a billet inner hub and pressure plate, are designed to greatly improve oil flow over OEM to keep the Rekluse TorqDrive clutch pack cool during the long motos. For those that know Tomac, you know he prefers a specific clutch feel and performance, and Rekluse is proud to deliver the Championship winning combo Eli raced with.

The entire Rekluse crew is extremely proud to have the opportunity to work with factory-level race teams such as Star Racing Yamaha. The team behind the Rekluse doors remains made of up of core enthusiasts of the sport, sharing the same passion as the fans in the stands and the riders in the pits. Congratulations Eli Tomac and Star Racing Yamaha!