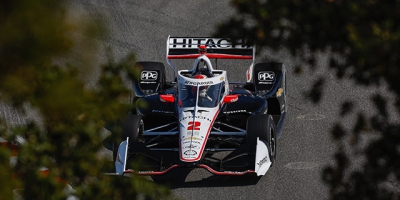 Josef Newgarden was the first driver among the contenders for the NTT INDYCAR SERIES championship to move chips toward the center of the table in this high-stakes confrontation, leading practice Friday for the season-ending Firestone Grand Prix of Monterey.

Two-time series champion Newgarden, who is second in points, 20 behind teammate Will Power, was quickest with a lap of 1 minute, 11.4103 seconds in the No. 2 Hitachi Team Penske Chevrolet. Scott Dixon (-20 points), Marcus Ericsson (-39) and Scott McLaughlin (-41) are the other drivers eligible for the title this weekend.

“I’m always confident,” Newgarden said. “I feel really good about this team. I’m never discouraged showing up to the track. The team really has done an excellent job this year. We’ve got to be good this weekend.”

Among the five title contenders, Power was second quickest and seventh overall at 1:11.9858 in the No. 12 Verizon Team Penske Chevrolet. Ericsson was next, 10th overall at 1:12.0803 in the No. 8 Huski Chocolate Chip Ganassi Racing Honda.

“You’ve definitely got to go get the pole because you can guarantee Newgarden is going for it,” Power said of his teammate. “Absolutely. And he’s going to be there to win the race.”

Following Newgarden in the overall top five was reigning Laguna Seca race winner Colton Herta at 1:11.8266 in the No. 26 Gainbridge Honda as the leader of three Andretti Autosport drivers in the top five. Romain Grosjean was third at 1:11.8697 in the No. 28 DHL Honda fielded by Andretti, followed by Alexander Rossi in Andretti’s No. 27 NAPA AUTO PARTS/AutoNation Honda.

Rookie Callum Ilott rounded out the top five at 1:11.9490 in the No. 77 Juncos Hollinger Racing Chevrolet. Ilott is not a contender for Rookie of the Year honors this weekend, but the two drivers vying for that crown, David Malukas and Christian Lundgaard, ended up ninth and 15th, respectively, in the 75-minute session.

All 26 drivers in the field struggled with the low-grip, very abrasive asphalt on the 11-turn, 2.238-mile Laguna Seca circuit, which also features the famous “Corkscrew” turn complex. Most drivers had at least one off-track excursion during the session, especially on the Firestone alternate tires.

“Tough track, man,” Power said. “Very low grip. You get one lap on tires, and they’re gone. It’s hard to get a read because the car changes so much over a run.”

There was one red flag, 47 minutes into the session. Jimmie Johnson went off track and hit the tire barrier in Turn 6 with the rear of his No. 48 Carvana Chip Ganassi Racing Honda. He was unhurt.