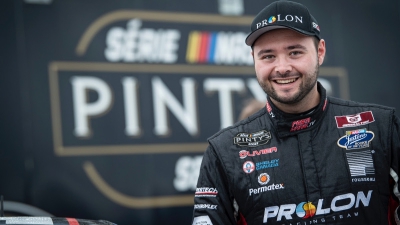 Jean-Philippe Bergeron made his first laps on the dirt track of Ohsweken Speedway (Ontario) in NASCAR Pinty’s Series last Tuesday. It was a first for the driver, but also for the series that had been waiting for this moment since 2019. All hopes were high. Despite starting 22nd and a very slippery track that made passing difficult, Bergeron still managed to work his way up to 10th place before the half-race. “The car prepared by the Jacombs Racing team was very competitive and I felt that I could stand out from my opponents. Unfortunately, fate had other plans”, says the driver. Indeed, with a few laps to go, the two cars in front of him collided. Bergeron was unable to avoid his predecessor, hitting him violently. This incident ended the race for the #1 Mustang.

Only Race in Montmagny This Year

Exceptionally this weekend, Bergeron will be back in the LMS with his #18 Prolon Racing car for the ACT Can Am 200 event that will take place on Saturday, August 20th at Autodrome Montmagny. With US$10,000 in prize money, Bergeron is aiming for nothing less than victory. The tests done last week on the 3/8 mile oval proved to be conclusive. The show will certainly be a good one for the fans since about thirty drivers are expected to attend, including a few Americans who will travel from the United States for the event. Fans can follow Quebecer JP “Bergy” Bergeron on Festidrag.TV at www.facebook.com/festidrag, on YouTube www.youtube.com/c/FestidragTV and on TéléMag. You can also follow JP and the Prolon Racing team on Facebook www.facebook.com/JPBRacing18, on Instagram @JPBergeronRacing and on the website www.prolonracing.com.