Camirand and Ranger Fourth and Seventh at Ohsweken Dirt Race 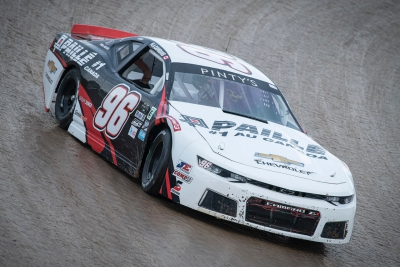 Marc-Antoine Camirand achieved a strong performance, Tuesday night, as the NASCAR Pinty’s series was racing for the first time ever on dirt, at Ohsweken Speedway. Camirand scored the pole and ended up the race in fourth place, while his Paillé Course//Racing teammate Andrew Ranger had a more difficult event but managed to secure a seventh place finish.

During optional hot laps on Monday night, Camirand improved from 22nd in the first session to sixth in the second session. The Camirand Performance crew, with the help of members of the Dirt Modified team ONE, worked to improve the car for the official event on Tuesday.

When Camirand went out for the first and only official practice, on Tuesday night, the driver of the GM Paillé/Chevrolet Canada n°96 Camaro scored the fastest lap early in the time trial session, which gave him the first spot on the grid for the qualifying heat race. He kept a fast pace during the 10-lap qualifying to score his first pole of the season.

He led the first 48 laps of the Pinty’s 100, but felt his car was losing traction as the track was getting more and more slippery. “I lost some track positions when I had to restart from the inside lane, falling back to the sixth spot, but I came back strong at the end of the race. I was hoping for a podium finish, but at the last lap, another car pushed me outside my groove, and I couldn’t hold him off,” stated the driver from Saint-Léonard-d’Aston. Camirand scored a well-fought fourth place finish.

“We didn’t know how we would run on dirt for this first race here, and I’m pretty happy with what we achieved here. It has been a good race for championship points”, concluded Camirand, who takes back the lead of the drivers’ standings, tied with D.J. Kennington.

His Paillé Course//Racing teammate Andrew Ranger was hoping to make a strong outing for the Pinty’s series debut on dirt. He scored quick lap times during practice sessions on Monday, but wasn’t able to carry that speed throughout the day on Tuesday, as the track became more slippery. Scoring the 14th quickest time in time trials, he was able to quality third in his heat race, earning the eighth spot on the starting grid.

“I couldn’t find traction on my GM Paillé/Chevrolet Canada n°27 Camaro. We came to the pits twice between the stages to try to make some adjustments and improve the car”, explained Ranger.

It seemed to pay off because Ranger moved up and fought for second place at some point in the race but started losing some ground again. “My car was not good on the long run. I did what I could to secure a top-10 finish, and I’m happy I was able to avoid the incidents on track”, Ranger said.

Paillé Course//Racing will be back in action with Marc-Antoine Camirand and Andrew Ranger at Circuit ICAR in Mirabel, as the NASCAR Pinty’s series returns to this short road course on Saturday, August 27th.