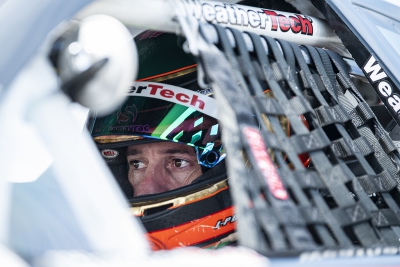 Louis-Philippe Dumoulin, driver of the #47 WeatherTech Canada | Groupe Bellemare car is looking forward with great anticipation to a new experience as he and the team head to Ohsweken Speedway today. The Dumoulin Competition team will discover a new oval track there, one that is added on the Pinty's Series schedule this year.

The Ohsweken Speedway is surfaced with dirt rather than the more usual asphalt! “I'm really looking forward to driving on the dirt, even though I don't have much experience on that surface,” said Louis-Philippe Dumoulin.

“I did a learning race at Autodrome Granby in a Sportsman Modified car a few weeks ago. The race was run as part of their season championship, and my goal was to gain experience rather than fight and have an impact on a regular competitor's results,” said Dumoulin.

The Ohsweken Oval is located 100 kilometres south-west of Toronto, near Hamilton. The 3/8-mile track provides action-packed entertainment for 25 years now. The prime location on the Six Nations Reserve allows over 8,000 spectators to come out and cheer on their favourite drivers on summer nights.

“We will put on a good show, even if it will not be easy for us drivers,” adds Louis-Philippe Dumoulin. “Dumoulin Competition has worked very hard to set-up the car for racing on the loose surface, a very different one from what we are used to.”

Indeed, because of the differences, the drivers will take part in two scheduled practice sessions on Monday night, the first at 6:30 PM and the second at 9:30 PM. The second session will feature the 'Qwick Wick Hot Lap' Challenge where the five fastest times will be rewarded.

The format of the Pinty's 100 race on Tuesday evening will also be new for Louis-Philippe Dumoulin. The race will be divided into three stages of 25 laps, 25 laps and a final stage of 50 laps. “It's going to be a big learning curve in a short period of time, but we're ready to take on the challenge, I find the format very interesting,” said the driver of the #47 WeatherTech Canada | Groupe Bellemare car.

The Grand Prix de Trois-Rivières was an intense event, to say the least, with action at all levels. Louis-Philippe Dumoulin could not achieve his goal at the end of that race. He is now looking forward to this event to rectify the situation, and it certainly look positive to him.

“Some drivers have considerable experience on this type of track; we are ready, and we will do well!” The #47 WeatherTech Canada | Groupe Bellemare car is currently fourth in the NASCAR Pinty's driver standings. Everything is still possible, which is why the Dumoulin Competition team must run to perfection all day, as well as for the rest of the season.