Louis-Philippe Montour Moves up to the Lead Pack, From 20TH on the Grid to a Brilliant 7TH in the End 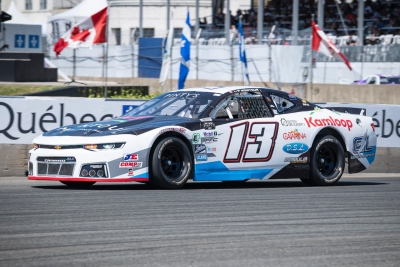 Louis-Philippe Montour drove a brilliant “60 Tours Rousseau Metal presented by Julia Wine” at the Grand Prix de Trois-Rivières (GP3R) this past Sunday. Despite the intense competition on the track and in the paddocks, and a stifling heat wave, the driver of the #13 Kamloop | GL Électricité-Automatisation | Groupe Consilium | Gestion Or Concept car finished in a strong 7th place in the streets of Trois-Rivieres.

Montour, a native of Blainville (Quebec), was competing in his third NASCAR Pinty's road course event this season and making his second appearance on the streets of Trois-Rivières.

Louis-Philippe Montour and his team encountered some difficulties on the first day of on-track action, but every issue was quickly resolved. “We had problems with the new brake system during Saturday morning practice. The Dumoulin Competition technicians worked very hard in preparation for qualifying, and we only set the 20th time,” explained Louis-Philippe Montour after Saturday afternoon qualifying.

With the brake problems solved on Sunday morning, the weather got involved in the party, as the race started an hour behind schedule due to thunderstorms and rain in the area. However, when the race started, nothing could stop the #13 Kamloop | GL Électricité-Automatisation | Groupe Consilium | Gestion Or Concept car as Montour weaved his way through the pack.

With a race strategy focused on consistency and above all, patience, Louis-Philippe Montour very quickly climbed into the top-15, then the top-10, by taking advantage of caution periods and with some smart moves on restarts to gain ground steadily. “We were patient and intelligent throughout the race, I kept telling myself 'stay cool and away from trouble' and it paid off!”

Louis-Philippe Montour added; “The last two restarts were quite eventful, especially the last NASCAR Overtime 'green-white-checkered' one, when I managed to avoid the incident at Turn 2 and keep my car intact.”

Indeed, this race saw virtually every car with some damage from rubbing and several accidents. Staying out of trouble was no mean feat!

“I'm very proud of what we achieved this weekend as a team because we overcame all the obstacles that came our way and finished 7th, an achievement that gives me great satisfaction!”

Louis-Philippe Montour concluded by saying that; “the Grand Prix de Trois-Rivieres represents much more than a major race to be added to my career, it is also an opportunity for me to thank the volunteers who are essential to running a major event like the GP3R. Indeed, Kamloop Foods provided 600 meals to the workers who stuck to their jobs despite the tough weather conditions. I would like to thank them for their dedication in allowing us to play at the sport we love, as nothing was really easy over the weekend!”