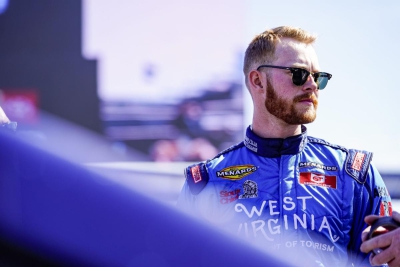 That is the attitude from ARCA Menards Series driver Christian Rose and his Cook Racing Technologies (CRT) team as they invade Lucas Oil Indianapolis Raceway Park for Friday night’s Reese’s 200.

Last week at the breathtaking Pocono (Pa.) Raceway, Rose impressed aboard his No. 42 West Virginia Tourism Chevrolet SS, but the team endured an electrical issue that ended their General Tire Delivers 200 after just 32 laps and left the team much more to be desired.

A week later, Rose and his team will have a chance to rebound in the 11th ARCA Menards Series race of the season and the opportunity for Rose to showcase his short-track skills once again – this time just outside the heart of Indianapolis.

“I’m so ready to get back to the track with our No. 42 West Virginia Tourism Chevrolet SS,” said Rose.

“Pocono was hard to swallow for me and our team – because we made such huge strides with our race car and for me as a driver and we really don’t have anything to show for it.

“Yes, we were able to overcome some adversity at the start of the race and march ourselves inside the top-10, but at the end of the day, we endured some more crazy bad luck. Hopefully, that’s over with for the last time this season and we can focus forward with a strong run under the lights at Lucas Oil Indianapolis Raceway Park on Friday night.”

With a pair of top-10s to his belt in 2022, Rose and his Bruce Cook-owned team are focused on making improvements from the first lap of practice to the checkered flag in the 200-lap race.

While Rose does not have any previous laps at Lucas Oil Indianapolis Raceway Park, he has used other resources available to him with the intention of his studying will pay off with hopefully his career-best ARCA finish under the lights.

“I am doing my best to prepare myself for Lucas Oil Indianapolis Raceway Park,” sounded Rose. “From studying photos, watching old ARCA and NASCAR Camping World Truck Series races, I feel like I’ve been doing my part to help curve any disadvantage I may have.

“I am also lucky enough to have other drivers I can go up and talk to and get advice and bounce thoughts and whatnot not only with the other drivers but my Cook Racing Technologies team too. I think it’s going to be a tough race on Friday night but a fun one.”

The first half of Rose’s partial 2022 schedule is complete, the Martinsburg, West Virginia native is focused on making the second half much better than the first which includes better results while also building a bigger fan base off the track.

“We are not leaving anything untouched,” added Rose. “There is no question that we have had speed in our No. 42 West Virginia Tourism race cars this season, but unfortunately for a variety of reasons we have not been able to deliver the results that we expect as a team for our partners.

“We are working hard to deliver big results for all our partners and even more fun with the fans this season. We have a few surprises on deck and can’t wait to roll it all out in the coming weeks and months ahead.”

The West Virginia Department of Tourism promotes West Virginia as a leading four-season travel destination and a top state to live, work and retire.

Known as the Mountain State, West Virginia is one of the most scenic states in the United States and home to thousands of acres of parks and public lands, including America’s newest national park and 45 state parks and forests.

In addition to its majestic mountains and rolling hills, West Virginia is full of rich historic sites, enchanting art galleries, charming towns and an immense sense of belonging found only in its heaven-like landscapes.

In West Virginia, let country roads lead you far away from everything. And a little closer to heaven.

“My relationship with the West Virginia Department of Tourism is everything to me,” added Rose.

“Without them, I would not be able to race at Lucas Oil Raceway. It is my goal throughout the year to spread the mission of everything the West Virginia Department of Tourism means.

“It goes without saying that we have had a lot of speed with our West Virginia Department of Tourism race cars this year and I’m hopeful we can climb that ladder of consistency during the summer stretch.

“We are seeing a great amount of response from the fans about their experience in West Virginia and that’s part of why we are building this program. Indianapolis is another next in the journey and I look forward to proudly representing my home state and continuing my mission.”

Before turning attention to the race on Friday, Rose will join a slew of his ARCA competitors, media personalities and NASCAR drivers in the Reese’s Celebrity Pro-Am Go-Kart Challenge at Speedway Indoor Karting on Thursday, July 28. The first race of the night will go green just past 8:00 pm ET.

Fans can participate in the Reese’s Celebrity Pro-Am Go-Kart Challenge for just $32 per race. Proceeds from the night’s activities will benefit Paws and Think.

“It will be a great opportunity to raise some money and have a lot of fun.”