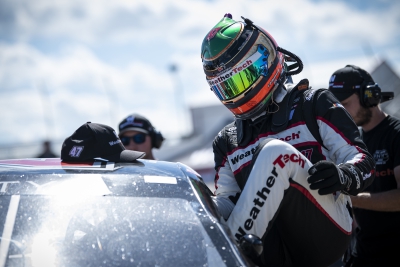 The NASCAR Pinty's Series concluded its annual Western tour at Sutherland Automotive Speedway. The oval track is synonymous with success and is well suited to Louis-Philippe Dumoulin and to the #47 WeatherTech Canada | Groupe Bellemare car that returned to the podium last night.

Two “Leland Twin 125s” races awaited the NASCAR Pinty's drivers: the first 125 was held in the early evening, followed an hour later by the final race. Facing tire pressure issues, Louis-Philippe Dumoulin had to settle for 8th place in Race 1, a very acceptable result especially for the championship points. The driver of the #47 WeatherTech Canada | Groupe Bellemare car finished the second race in third place, a podium that was welcomed with pride by the entire team after a day of high intensity.

“We've been having trouble with the car all day,” explained the driver of the #47 WeatherTech Canada | Groupe Bellemare car who finished 8th in Race 1. “We had trouble with tire pressure, so we made some changes. The car understeered a lot.”

“Nevertheless, we moved up to 7th near the end of the race and the last few laps started as part of the NASCAR overtime 'green-white-checkered' race end procedure. On the restart, I got stuck behind a competitor who was slow to accelerate, so we couldn't gain any positions. The goal was to stay calm and get the car back in good shape for the second race of the evening. Eighth position is decent; however, we had more speed in the car than we could use!” according to Louis-Philippe Dumoulin after Race 1.

Indeed, the #47 WeatherTech Canada  | Groupe Bellemare car was blocked and left some extra speed on the track at the finish of Race 1! Starting this time from 13th position, Louis-Philippe Dumoulin worked his way into the top-5, then broke into the top-3 early in the race. With the leader building an advantage, Louis-Philippe Dumoulin's only option was to defend his position, which he did intelligently.

“We are happy to get on the podium,” said the driver after the event. “The #47 WeatherTech Canada | Groupe Bellemare car was very fast. I still had a little too much understeer, but the team worked very hard to correct the set-up and we succeeded. This bodes well for the rest of the season, and we are looking forward to racing at home at the Grand Prix de Trois-Rivières next week!” concluded a satisfied driver after Race 2.

Louis-Philippe continued, “We tried different tire pressures, especially on the front right as it works very hard on this track, and we need to get the most from it. We got it wrong a little bit, but we'll get it right for the races.”

Every year in Saskatoon, we are lucky enough to stay at the Delta Bessborough, our partner over the past sixth years. The entire staff welcomes us with courtesy and generosity. The team is also welcomed by Tiger Automotive, a distributor of the WeatherTech Canada products who also allows us to use their indoor facilities to work on our car. A great “Merci” to all of you. It is an honour to represent you on the track and in the media.

We're here! Team #47 WeatherTech Canada | Groupe Bellemare is back home now and ready to participate in the most important race of our season, the legendary Grand Prix de Trois-Rivières, on August 5 to 7. This race always has a special meaning for the Dumoulin brothers as it takes place in their hometown, with all its memories and achievements.