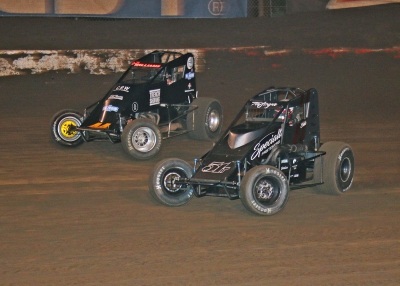 When Eddie Tafoya junior and his crew got word that this Friday and Saturday night’s USAC/CRA Sprint Car Series races were canceled, they decided to hit the road. Instead of sitting idle, the team is headed to Brandon, South Dakota for this coming Friday, Saturday, and Sunday’s USAC Nationals at Huset’s Speedway.  All three nights of action will feature the USAC National Sprint Cars and National Midgets.

The whole scenario was created last week when the Friday, July 8th race at Keller Auto Speedway in Hanford, California, and the July 9th race at the Stone Chevrolet Buick GMC Thunderbowl Raceway a few miles up the road in Tulare were both canceled.   The reasons for the cancellations were drought and water restriction conditions, the current tire crisis facing all of racing, and the cost of fuel.  The deletions created a six-week void in the USAC/CRA Series schedule before the next slated race at the Santa Maria Raceway on August 6th.

Tafoya has made several trips to Indiana to race in the national series over the past few years. However, this week’s races will be his first-ever in “The Mt. Rushmore State.”  Huset’s Speedway, which opened in 1954, recently had a massive upgrade and is now considered one of the crown jewels of dirt tracks in the United States.  The 1/3 mile banked oval is also one of the fastest in the country.

It will be Tafoya’s second trip to race in the Midwest in 2022. At the beginning of May, the Chino Hills, California driver went back for a two-night show at Tony Stewart’s Eldora Speedway in Ohio.  Unfortunately, the team was within a couple of hours of its destination when it got word that the shows had been canceled due to heavy, persistent rains. That was the only trip to the Midwest the team had scheduled this year until the two cancellations were announced last week.

The 2019 USAC/CRA and USAC Southwest Series Rookie of the Year is having his best year to date racing 410 Sprint cars.  In 12 starts in the USAC/CRA Series, Tafoya has placed in the top five, five times, and has been in the top ten nine times. Included is a second-place finish on January 29th at Arizona’s Cocopah Speedway and a third-place finish on another “Copper State” track, the Mohave Valley Raceway, on April 23rd.  All told, the good finishes currently have him ranked fourth in USAC/CRA points and he has been closing in on third.

For those who can get away and who would like to watch the 2018 Perris Auto  Speedway Young Guns Champion in his South Dakota debut, the track is located at 2012 S. Splitrock Boulevard in Brandon, South Dakota (57005).  Racing will begin each night at 7:00 p.m. CDT.  The race website is https://www.usacnationals.com/ and the email is This email address is being protected from spambots. You need JavaScript enabled to view it..

For fans who cannot make it to the race, all three nights will stream live on Flo Racing.  Details are at https://www.floracing.com/.