McLaughlin Holds Off Palou to Win at Mid-Ohio Featured 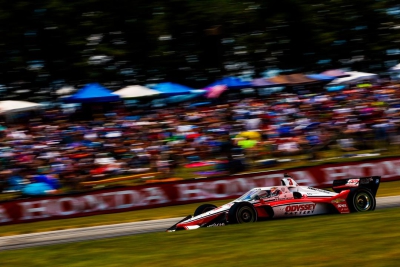 Scott McLaughlin, the 2021 IndyCar Rookie of the Year, won Sunday’s NTT IndyCar Series race at Mid-Ohio, becoming the second driver to win multiple races this season. The winner of the season opener at St. Petersburg led 45 of 80 laps to cruise to his second win in his fledgling IndyCar career.

Team Penske has a penchant for finding success at Mid-Ohio Sports Car Course, a road racing crown jewel tucked away in midwestern farmland. With McLaughlin’s win on Sunday, owner Roger Penske now has 12 wins at the historic racecourse.

McLaughlin started second in the race, and ran top 5 for much of the early stages of the race. McLaren driver Pato O’Ward won the pole and led from the start. His teammate, Felix Rosenqvist, started fourth and ran as high as third before a surprise engine failure ended his day early on lap 8. O’Ward would eventually suffer the same fate as his Swedish ally, as he steadily lost power (and the lead) following a pit stop on lap 28. Kyle Kirkwood had a hard crash that brought out the caution, giving McLaughlin the lead as the race neared halfway. McLaughlin led the next 24 laps. Colton Herta grabbed the lead for 7 laps as the race neared the end, but the Andretti Autosport driver couldn’t stay out front forever due to his pit strategy, and McLaughlin reclaimed the lead when Herta pitted. In the final stint, he held off a hard-charging Alex Palou, giving him the win in the ninth race of the 2022 season.

The race was far from a snoozer- 6 cautions for 17 total laps meant that the longest green flag run was only 19 laps. Multiple championship contenders had issues- O’Ward and Rosenqvist contributed to a double retirement for the Arrow McLaren team. More riveting still was the fireworks provided by teammates Romain Grosjean, Alexander Rossi, and Colton Herta. Racing hard for position in the second half of the race, Rossi forced Grosjean off the track and into the wall, sabotaging his own line in the process. Mere laps later, Grosjean made contact with Herta, sending the young star into the gravel. Owner Michael Andretti called a team meeting postrace, which Grosjean commented on while speaking to NBC Sports.

“It wasn’t pleasant, but it was good that he did it,” Grosjean remarked. “I understand he’s frustrated and not happy with us.”

In the same interview, Grosjean called Rossi “an absolute idiot”, while also admitting responsibility for the accidental contact with Herta in an apology to his teammate.

McLaughlin debuted in 2020 for Team Penske, making one start at St. Petersburg to get his feet wet in IndyCar. The Australian Supercars legend, winner of 3 straight championships and 56 total races across 8 full-time seasons, made the full-time jump to IndyCar last season. He won his first race at this year’s season opener in St. Petersburg; with his Mid-Ohio win, he joins teammate Josef Newgarden as the only drivers with multiple victories in 2022. Despite being in only his sophomore IndyCar season, McLaughlin feels like he’s rapidly getting used to the car.

As he looks ahead to the next race in Toronto, he’s optimistic of their chances to get back in the championship fight.

“I'm excited for what's ahead,” McLaughlin said. “A win is a big thing for us, moved us forward a little bit. I don't know where it's put us in the standings, but if we keep building, I feel like Toronto is going to be a track that's going to suit me.”

The win moved McLaughlin from ninth to seventh in the points standings, past Alexander Rossi and Simon Pagenaud. Marcus Ericsson still leads the series with a 20 point lead over second place Will Power, as the 2022 season enters the stretch run. Josef Newgarden is in third, and Alex Palou and Pato O’Ward round out the top 5 with 8 races to go.

Scott McLaughlin is only 29 years old, despite his years of success in Australian Supercars and budding IndyCar performance. However, his win on Sunday shows that he’s here to stay- and he’ll grow to stardom in the process.