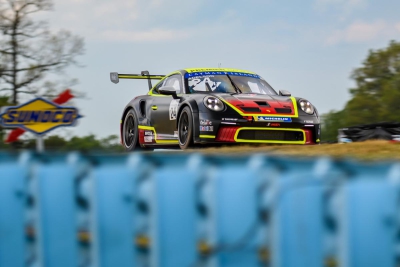 After nearly two months away, Premier Racing is eager to get back racing in the Porsche Carrera Cup North America Presented by the Cayman Islands. With the championship’s last event taking place in early May, it has been a long break for Adam Adelson (Las Vegas, Nevada now living in Los Angeles) and the Kent Moore-led operation. However, testing in the No. 24 Premier Racing Porsche 911 GT3 Cup car and competition in SRO GT4-competition has kept the Las Vegas-based race team sharp. The race series, exclusively for Porsche 911 GT3 Cup cars, is widely recognized as the most competitive one-make race series on the continent. Rounds Seven and Eight of the 16-race championship will take place at Watkins Glen International, the iconic road course in the Finger Lakes region of New York state. Porsche Carrera Cup North America will run in support of the Six Hours of The Glen, June 23 – 25.

Testing two weeks ago at the 3.4-mile, 11-turn race course adds to the confidence of the team entering the season’s midpoint. The team used extensive input from both Adelson and SRO teammate and driving coach Elliott Skeer (San Diego, California) to fine-tune the 500 HP Porsche for this weekend’s race. Practice got underway on Thursday, June 23 with two 30-minute sessions. Adelson will have 30-minutes starting at 8:45 a.m. ET on Friday, June 24, to set his best time in qualifying for the Pro class of Race 1. The first of the two scheduled 40-minute rounds will take the green flag later that day at 1:25 p.m. ET/10:25 a.m. PT. The second race will be run at 11:05 a.m. ET/8:05 a.m. PT on Saturday, June 25.

Live timing and scoring of all sessions as well as streaming of both races can be found at www.PorscheCarreraCup.us . The races also air live on the Peacock Streaming App.

“It’s hard to believe that we’re already halfway through the season; it feels like just yesterday we were rolling the 992 Cup car out of the trailer for the first time. It’s been an incredible experience so far, especially since we started bringing home wins and podiums in the SRO! The team has improved dramatically since the start of the season, and I feel the same way about my driving. Coming into rounds seven and eight of Porsche Carrera Cup, I’m feeling quite confident that we can move further up the field. The two day test we had here at The Glen a couple of weeks ago gave us invaluable data and information about the car. During that test I felt as if I was really figuring out how to drive the 992 Cup the way it wants to be driven. Now, it’s time to take everything we’ve learned so far this season and put it to the test. As always, the field in Carrera Cup is incredibly tight and packed with talent, but we’ve been on our A game and I’m excited to see what we can achieve here this weekend.”

“It has been a long break since Carrera Cup last ran but we have been anything but sitting still. We tested the Cup car here at The Glen a few weeks ago and we have raced several SRO GT4 races including capturing three wins with the Porsche 718 Cayman GT4 RS Clubsport. We are keeping the team sharp, and we are keeping Adam sharp. There is no replacement for seat time, especially for a young driver and young team. We have been making sure Adam has plenty of time behind the wheel. The test here went well. Adam turned a lot of laps and we also got great input from Elliott [Skeer]. We are confident we have a good setup, and we are ready but this series is tight. You don’t get a chance to make a mistake that someone else won’t take advantage of. But that is why we are here, to battle the best.”