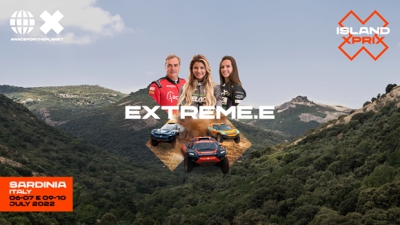 After the first X Prix of Extreme E Season 2, the Championship now moves from the deserts of NEOM to the historic Capo Teulada area of Sardinia, with just one month to go until the on track action gets underway on the Italian island.

Extreme E returns to Sardinian soil for the Island X Prix, again co-organised by the Automobile Club Italia and, for the first time, there will be a double-header event, with two rounds in one week (6-7 and 9-10 July 2022). The series was created to raise awareness about the effects of climate change and sustainable solutions in the most remote corners of the planet, but Sardinia has shown that the problem does not only concern places located at the most extreme latitudes.

Alejandro Agag, Founder and CEO of Extreme E, said: “After an extended break, it is exciting to return to racing once again especially with our first ever double-header event. On track action at our first X Prix of Season 2 in NEOM was spectacular and we hope our two rounds in Sardinia will prove to be just as captivating as the drivers face a totally different kind of challenge.

“We are delighted to be returning to Sardinia, which held our maiden European event last year. It was a dramatic Island X Prix which only added to Sardinia’s rich rallying history and pedigree, while off course the region will highlight some of the issues facing Europe and the wider world. We will be revisiting our legacy programmes focused on restoration of some of the areas hit by wildfires as well as showcasing electric vehicles and clean energy solutions.

“I would like to take this opportunity to thank the Automobile Club d’Italia, the Region of Sardinia, the Ministry of Defence and the Italian Army which has been supporting us every step of the way.”

The event will be returning to the Season 1 location of the Army Training area at Capo Teulada in Sulcis-Iglesiente, an historic area situated in the south-west of the island.

The Teulada route is ideal, providing a challenging backdrop for the course which will measure around seven kilometres. Due to the hot summer conditions in July, the terrain will be much dryer than last year’s Island X Prix with the drivers having to navigate a harder, more compact surface riddled with rocks, bushes, and dry riverbeds cracked from the heat.

Extreme E has been working closely with Automobile Club d’Italia - the national sports federation co-organising and coordinating the event - the Region of Sardinia, and its Tourism Department plus the Ministry of Defense and the Italian Army to deliver what promises to be a week of double the racing and double the excitement.

Automobile Club d’Italia president Angelo Sticchi Damiani said: “Motor racing and competition are the combination that fuels new solutions for sustainable mobility towards zero emissions. Italy, thanks to Sardinia and the perfect scenery of its uncontaminated territory, is also a world protagonist for this great technological challenge, hosting no less than two stages of Extreme E, the toughest race for so-called zero-emission vehicles.

"ACI expresses satisfaction and pride for the confirmation of Italian motorsport's ability to constantly face and guide the evolution of competitions and this complex race reserved for off-road vehicles.”

The Sardinian Regional Councillor for Tourism, Gianni Chessa, added: “The Island X Prix of Extreme E is a unique event. It is a world-class event, which takes place in a military area and gives people the opportunity to experience a portion of the territory that was seen as inaccessible and which could instead host other sporting events. Through sport, we are giving visibility to Sardinia, in this case with the most prestigious competition held in Sulcis Iglesiente.

“After the first edition, last October, we are welcoming the Island X Prix again, with no less than two races, which will be held in July and will be the only ones in Europe in the renowned series reserved for electric SUVs.”

Away from the track, the pioneering series will continue with its initiatives to highlight climate change issues and support local communities.

It is becoming increasingly noticeable that Sardinia and most other environments are increasingly susceptible to rising temperatures, heatwaves and wildfires.

Continuing to work alongside the MEDSEA Foundation (Mediterranean Sea and Coast Foundation) to support two significant projects, the Extreme E Legacy Programmes in Sardinia focus on both blue and green carbon stores.

For Round Two, the first project explores Green Carbon. The sport for purpose Championship will be returning to Sennariolo to visit the communities impacted by the devastating wildfires in 2021.

Last year, the fires blazed through 20,000 hectares of land, displaced over 1,000 people and killed around 30 million bees. Extreme E continues to help restore the historic olive groves lost to the wildfires in these areas and run a Fire Prevention Campaign within the local communities on forest fire prevention.

As for Round Three, the second project supports the conservation of Posidonia oceanica (seagrass), mitigating the detrimental effects of Blue Carbon in Mediterranean waters.

Seagrass is thought to be one of the most rapidly declining ecosystems in the world. Extreme E will continue their collaboration with the MEDSEA Foundation, helping to analyse and replant seagrass along the degraded Sardinian coastline.

Despite only occupying 0.2% of the ocean floor, seagrass stores 10% of the oceans carbon and can capture 30% more from the atmosphere than its tropical rainforest equivalent. Preserving seagrass ecosystems is a vital step in combating the climate crisis.

Last year Extreme E’s own scientists, in partnership with ENEL, worked with MEDSEA to reconnect and replenish the seagrass beds of Posidonia oceanica in the waters of the Marine Protected Areas around Sardinia. We continue to work with MEDSEA to continue this work for a second season.

Brigadier General Stefano Scanu, Commander of the Sardinia Army Military Command, said: "The Army has enthusiastically welcomed the choice made by the organisation and Alejandro Agag to hold the European round of the Extreme E series at the Capo Teulada Training Area again this year. The choice of Extreme E, whose main mission is to promote the conservation and protection of the environment, fits in well with the Army's focus on the issue of environmental protection, seen as an ethical and institutional duty that over the years has taken the form of numerous initiatives aimed at preserving the natural heritage included in our training and logistics areas.

“The beauty and unique characteristics of the territory in this area of Sardinia, which is considered of community interest, are clear proof of this. The Army is an institution at the service of citizens, which has always welcomed any activity that favours the development of local realities, especially those that, in compliance with safety and environmental protection regulations, generate important economic spin-offs in the surrounding territories.

“These activities are, moreover, provided for in the Regulations for Use signed with the President of the Autonomous Region of Sardinia in December 2020, which foresee the use of parts of the polygon for initiatives that can have important economic repercussions in the area.”

The maiden Island X Prix last October proved to be a thriller. Season 1 Extreme E champions, Rosberg X Racing (RXR), executed a measured drive to claim the win after Chip Ganassi Racing and X44 were denied victory after suffering technical issues which ruled them out of contention.

After securing an opening round win in the Saudi Arabian desert, RXR will once again be the team to beat as the Championship gets set for a double Sardinian summer showdown.