An end of race to forget for Bergeron in Vallée-Jonction 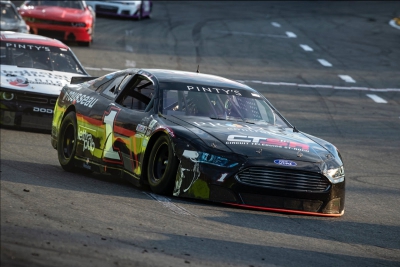 The driver of the #1 Prolon Controls/Rousseau Métal/CTSR/Groupe Olivier Mustang, Jean-Philippe Bergeron, was at Autodrome Chaudière yesterday for the third NASCAR Pinty's race this year: the Quickwik 250.

After setting excellent times in practice last week at Flamboro Speedway, Ontario, Bergeron was surprised by the car when it did not turn well in the center of the corners during his first run at Autodrome Chaudiere on Saturday. With the help of Mario Gosselin (owner of the NASCAR Xfinity DGM Racing team in the United States), while making various changes to the car while waiting for qualifying, the Jacombs Racing team found a faulty shock. As soon as it was fixed, the car was much better, but with only two qualifying laps to get used to the different handling of his car, Bergeron had to settle for 16th place as his starting position, despite being only two tenths of a second off the pole.

Despite the fact that Bergeron's car was loose at the start of the race, he still managed to gain valuable positions from the start. The yellow flag just before lap 110 surprised the driver who did not see it quickly enough. As a result, he hit the number 8 car of Raphaël Lessard and damaged the front suspension. On the restart, Bergeron had to slow down because of a slow flat tire due to the collision and lost two laps before the mid-race stop on lap 125. That's when the team took the opportunity to repair the suspension and change the tire.

During the second half of the race, the car was better. Thanks to the lucky dog, Bergeron managed to make up for the two laps he was behind. A few daring moves allowed him to advance in the field until lap 244, when a reckless move ended his participation with only six laps to go. While trying to get between the number 12 Kingsbury and number 2 Rinomato cars, Bergeron literally swallowed up Rinomato in spectacular crash.

Although the Vallée-Jonction race is one to forget for Jean-Philippe, he continues his battle for the NASCAR Pinty's Series Rookie of the Year title. "I continue to gain experience, both in the good shots and in the not so good ones" underlines the driver rather disappointed with the turn of events.

The QwickWick 250 presented by St-Hubert will be broadcast on TSN on June 18 at 3:00 pm. The date and time of the broadcast on the French network RDS is to be determined.

Next event: Team #1 Prolon Controls | Circuit téléguidé Saint-Roch | Groupe Olivier | Rousseau Métal will travel to the island of Newfoundland on June 25 for the Pro-Line 225 event. The 3/8-mile oval circuit of the Eastbound International Speedway is located in the town of Avondale.