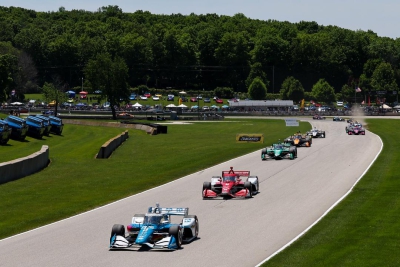 Josef Newgarden already won a race at an oval and a street circuit this season. Entering Sunday’s race at Road America, he hadn’t completed the third requirement of the PeopleReady Force for Good Challenge. The bonus, $1 million to the first driver to win a race at all 3 types of tracks that the IndyCar series races at (oval, street course, road course), is set to pay half to the team and half to the driver’s charity of choice. Newgarden won at Texas in March and Long Beach in April and now, with his win on Sunday at Road America, has completed the challenge. Team Penske receives $500,000, and 2 charities will split the remaining $500,000, SeriousFun Children’s Network and Wags and Walks Nashville. The win is Newgarden’s 23rd of his already stellar career, and moves the two-time champion to third in the points standings.

Alexander Rossi started on the pole, with Newgarden in second and Alex Palou in third. Rossi led the first 14 laps before ceding the lead at the first pit stop cycle. A flurry of cautions at the start of the race kept the field from getting into a rhythm early. Jimmie Johnson went off track in turn 3, triggering a lap 1 yellow when he couldn’t get his car running again. On the restart, Palou and teammate Marcus Ericsson made contact that sent Palou into the gravel trap. The wheels on Palou’s car were knocked out of alignment and, while he did eventually return to the racing surface, he finished in last place, 19 laps down. Palou was visibly frustrated when interviewed on TV after the wreck, with some strong words for his teammate, but Ericsson had a different view post race.

“I don't see I did anything wrong,” Ericsson said. “It was a fully race move. Might have been early in the race, but this race is a track-position race. If you get an opportunity, you need to go for it. As I said, there was nothing wrong with that move. That was clear on the TV pictures.”

Rookie Devlin DeFrancesco spun Will Power, the points leader coming into the weekend, into the wall, damaging Power’s front wing. The team for the no. 12  Verizon Chevrolet was able to put a new wing on the car after he limped it back to pit road, but he was unable to make much of a recovery and finished in 19th place.

As the field approached the first pit stop, Newgarden closed in on Rossi, the leader of the race.

Both drivers pitted on the same lap and Rossi, partially impeded by another car pitting in front of him, was unable to beat Newgarden out of the pits, a move which ended up deciding the race.

Felix Rosenqvist, Graham Rahal, and Rinus VeeKay all employed an alternate strategy, which was successful for Rosenqvist and Rahal as they saved enough fuel throughout the race to grab a top 10 finish.

Alexander Rossi continued to try to chase down Newgarden over the course of the afternoon, but was unable to make up a significant amount of time. He stayed out longer during the next pit cycle without much success. After the final pit stop of the race, Rossi did start to close in on Newgarden, cutting the lead down to under 3 seconds with 9 to go, and may have caught Newgarden if not for a late caution.

Pato O’Ward’s engine expired with 8 laps to go, bunching up the field. When they restarted with 5 to go in the race, Helio Castroneves spun onto the front stretch, forcing yet another caution flag out, setting up a 2 lap shootout to decide the race. Newgarden got a huge jump on Rossi on the restart and set sail, leaving the rest of the pack to fight amongst themselves for the remaining two spots on the podium.

Indy 500 winner Marcus Ericsson got around Rossi to finish second, with Rossi getting his second podium in a row with a third place finish. Romain Grosjean finished fourth, and teammate Colton Herta finished in the fifth position. Felix Rosenqvist, Scott McLaughlin, Graham Rahal, Scott Dixon, and rookie Christian Lundgaard rounded out the top 10.

Newgarden is the only driver with multiple wins on the season, which he says is an accomplishment given how tight the series is this year.

“Yeah, it is very difficult to win these races consistently. To be able to put multiple on the board, it's a job well done to everybody in the 2 group.”

“It's the most competitive series in the world. We have 27 cars this weekend. I think that's incredible. Out of those 27 cars, it feels like at least 15 of them can win the race if they have their day. It's really fun to be part of that. Yeah, I think it's going to be tough all year. Miss a little bit one weekend, you're P10 or P15. It means you need to be on top of things all the time. Last weekend was a good example. A bit off on strategy, didn't work our way. We managed to finish seventh. That's the results we need if we want to win the championship.”

Due to Power and Palou’s misfortunes during the race, Marcus Ericsson jumped back into the NTT IndyCar Series points lead by a commanding 27 points following Road America. Power drops down to second, with teammate and winner Josef Newgarden in third place. Pato O’Ward and Alex Palou complete the top 5. Alexander Rossi appears to have found a new gear, with 3 straight top 5s and 2 podiums in a row. He now sits in seventh in the points standings.

Newgarden admitted that he forgot about the bonus in his post race interview. But, with his third win and $1 million for his team and charities in his pocket, he definitely is aware of it now.