A Race That Pays off in Points for Kevin Lacroix 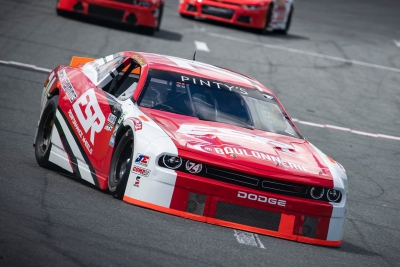 It was an up and down race for Kevin Lacroix this past Saturday night at Autodrome Chaudière. The NASCAR Pinty's Series had its first stop of the season at a Québec-based oval known for its devoted fans.

Lacroix Motorsport struggled with the oval car, like at Sunset Speedway last month. The driver of the #74 Lacroix Tuning | ESR Performance Wheels | La Boulonnerie car was only able to post the ninth-fastest time in qualifying, even though he has had success at this track in previous years.

"Once again, we had trouble with the oval car," said Lacroix. "However the race went well, we weren't very fast in the first few laps, but after a while, the car improved, and I moved up to third."

The field was particularly strong during the race in Vallée-Jonction; "I fell back to 5th position because it was very tight at the front, there were many drivers who were fast and in the same times. I really enjoyed racing on Saturday night; it was fun until I got a flat tire with 20 laps to go, which caused me to spin!"

Lacroix Motorsport quickly changed the right rear tire on the #74 car, but Kevin was already behind the rest of the field. "We were two laps down, but I still managed to finish 13th. That's not too bad. We're used to having big problems and finishing 25th, but on Saturday night, we could score points despite the flat tire."

He concludes by stating, "I think we deserved 5th place, but I'll take 13th and put the points in the bank!" With his win at Canadian Tire Motorsport Park, Lacroix still leads the overall standings but ex aequo with Alex Tagliani.

The QwickWick 250 presented by St-Hubert will be broadcast on TSN on Saturday, June 18, at 3 pm. The next NASCAR Pinty's event will be at Eastbound International Speedway in Newfoundland on June 25.