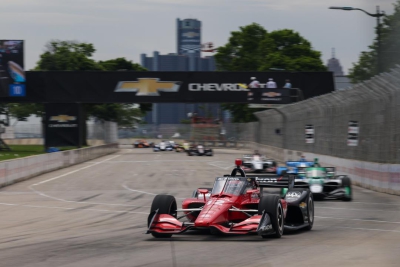 Will Power, one year after a crushing defeat at the same track, won the Chevrolet Detroit Grand Prix in the final race at the famed Belle Isle circuit on Sunday. Last year, Power led the most laps and was in control of the race, but following a late red flag, his car failed to refire and he finished 20th. Sunday’s race was thrilling; Alexander Rossi chased him down in the closing laps on an alternate strategy, but Power held on with worn tires to beat the American star. The win is the 41-year-old Kiwi’s first victory of the season and 41st in his career.

2-time champion Josef Newgarden took the pole for the final race at the Belle Isle racetrack, situated on an island in the Detroit River. Next year, IndyCar will race instead on a street course in downtown Detroit that closely mimics the layout that Formula 1 used for 7 years from 1982-1988. Belle Isle, following this year’s race, has hosted 30 US open wheel events between CART and the NTT IndyCar Series. Newgarden led the first 13 laps of the race before teammate Will Power passed him for the top spot. Power led the next 11 before pitting, but resumed the lead following the conclusion of the pit stop cycle. Scott Dixon and Alexander Rossi both opted for an alternate strategy, while Power chose to finish his last stint on the softer Firestone red alternates, which had more speed but expired faster. The race stayed green for all 70 laps, making it a straight strategy battle between the top teams.

Rossi bested Dixon towards the end of the race and set his sights on Power, who’s tires were beginning to fade. With 10 laps to go, Rossi had cut the lead down to 11 seconds; at 4 to go, Power’s advantage was at 8 seconds. Rossi made a hard charge in the last 2 laps, but was only able to get the lead down to 1 second at the checkered flag, forcing him to settle for second. Power led 55 laps en route to his victory.

Following his win at Belle Isle, Will Power reclaims the points lead in the NTT IndyCar Series standings over Marcus Ericsson. Power sits at 255 points, only 3 points ahead of Ericsson and only 12 over third place Pato O’Ward. 2021 champ Alex Palou is still only 15 points back, so the top 4 are under a blanket in points as the season approaches the halfway mark.

Power is confident that he can continue his strong season next week, at Road America, and beyond.

“It's different every weekend. But we have been really strong at pretty much everywhere except Indy this year. Yeah, yep, I think the team, the engine is really good. I think the team is good. It has been. Everything is just flying nicely for us now. “

Power, 41, isn’t the young prodigy anymore; rather, he’s one of the seemingly few in the paddock who hold veteran status as a result of IndyCar’s youth movement. But in winning the final race at Bell Isle, he’s shown that he’s still very much a championship threat.