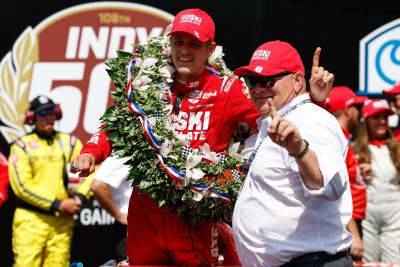 From 2014 to 2018, Swedish driver Marcus Ericsson made 97 starts in Formula 1 for Caterham F1 and later Sauber F1. The 32 year old only scored 18 points across nearly 5 complete seasons on open wheel racing’s international stage, with a best finish of 8th place. Following 2018, Ericsson was released from his F1 job and now, almost 4 years later, he’s an Indianapolis 500 champion.

Ericsson started 5th in Sunday’s race, the 106th running of the greatest spectacle in racing, 3rd out of 5 Chip Ganassi Racing Hondas that made the Fast 12 in last weekend’s qualifying session. Once the race started, Ericsson faded into the background- always there, running well, but rarely mentioned. Teammates Scott Dixon and Alex Palou, both of whom have won IndyCar championships, paced the field in the early going of the 500. Ericsson remained consistently in the top 10 while Dixon and Palou battled Rinus VeeKay for the early lead. VeeKay brought out the first caution when he got loose and crashed coming out of turn 2 following the first cycle of pit stops on lap 39.

The race continued through the afternoon, and Palou and Dixon continued to dominate up front. Palou received a stroke of bad luck when the caution came out while he was coming to pit road. Forced to pit while it was closed due to fuel concerns, he was sent to the rear of the field when the race restarted and only managed to recover to a 9th place finish. Romain Grosjean crashed on lap 106 when he spun off of turn 2, a trouble spot for the drivers throughout the race, which ended his first Indy 500 start.

Dixon continued to lead, though local driver Conor Daly ran up front as well, swapping the lead with Dixon multiple times during the course of the race. After a caution for Scott McLaughlin on lap 151, the field was set for the final run to the checkers for the Borg-Warner trophy. One pit stop lay between Dixon and his second Indy 500 win; if he nailed that, he’d be the favorite to win the race.

Unfortunately for the driver of the no. 9 PNC Bank CGR Honda, he did not nail the final stop. Dixon sped on pit road, necessitating a pass through penalty on the ensuing lap that effectively ended his chances at Indianapolis glory. With Dixon out of the picture, the door was wide open for other competitors and Ericsson, following the completion of the final green-flag pit cycle, found himself leading. Arrow McLaren drivers Pato O’Ward and fellow Swede Felix Rosenqvist followed closely behind, as did fan-favorite Tony Kanaan. As the laps wound down, O’Ward began to slightly reel Ericsson in, but it was not going to be enough to catch him barring a miracle. With 6 laps to go, Jimmie Johnson went head-on into the fence to bring out the caution once again, and IndyCar made the decision to red flag the race. They could have allowed the race to finish under yellow, but instead decided to give the fans a green-flag dash to the finish. O’Ward, it seemed, had his miracle.

The race restarted with 2 laps to go- an almost NASCAR-style finish to decide the winner. Ericsson led the field to green, with O’Ward and Rosenqvist in hot pursuit. Down the backstretch, Ericsson weaved and snaked his way towards turn 3 in an attempt to break the draft that would allow O’Ward to slingshot past- and out of turn 4, coming to the white flag, O’Ward had a run on Ericsson.

O’Ward shot his nose in front of Ericsson and briefly held the lead but was on the outside, and he had to lift entering turn 1. He regrouped and prepared for a last-ditch effort to pass Ericsson later in the lap, but Sage Karam crashed and the race ended under yellow. O’Ward had his miracle, but he couldn’t capitalize on it. Ericsson is now the second Swedish driver to win the Indianapolis 500 (Kenny Bräck, 1999), and the win is the first for owner Chip Ganassi since 2012 with Dario Franchitti.

Ericsson, following his Formula 1 exit, signed with Schmidt Peterson Motorsports full time in 2019 before moving to Chip Ganassi Racing prior to the 2020 season. Last year, in 2021, he won his first IndyCar race at Belle Isle, then backed it up with another win later in the summer at the inaugural Nashville GP. Since the Indy 500 is double points, his win puts him atop the standings, ahead of O’Ward and Palou.

“I came over here, and people probably didn't think much of that. I had to work my way here as well, learning American racing. Moved here, put my whole life into trying to become an INDYCAR and mainly Indianapolis 500 champion.”

Ericsson may not have been able to showcase his talent to the fullest extent in F1. Some may fault him for that. But now that’s irrelevant, because he’s a winner of the biggest race in the world.