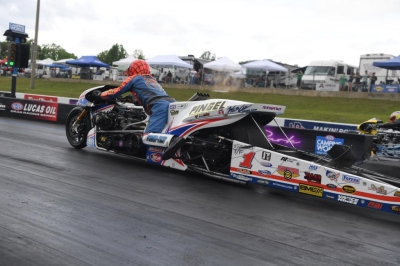 In an incredible showcase of speed, Larry “Spiderman” McBride delivered the fastest motorcycle pass in drag racing history on Saturday at Virginia Motorsports Park, making a historic Top Fuel Motorcycle run during the weekend’s Virginia NHRA Nationals.
McBride’s spectacular blast of 268.38 mph gave him the fastest pass ever on two wheels in drag racing history, shattering the mark of 265.95 he had set last November. McBride went 5.61-seconds on the run – just shy of his quickest run of all time – as part of a Top Fuel Motorcycle exhibition at the NHRA Camping World Drag Racing Series event in Virginia, also breaking the speed record at his home track.
“To be able to do it here at home was incredible,” said McBride, who resides in Poquoson, Va. “I've been treated like a king here. It has been awesome that all the Top Fuel car guys and Funny Car guys who have helped me and all the support that I've gotten. The bike got a little bit loose, and I had to pedal it a little bit -- you know, just grabbed the rear brake -- to get it caught back up, and, boy, really run a good back half. I knew I went awful fast. I didn't really realize I went 268, but I knew it was really fast.”
McBride’s massive run from Saturday was the talk of the weekend, starting with the tremendous fanfare enjoyed at the track following the record pass. His impressive dash into the record books has also turned into a spectacular hit online, with the run already attracting more than 1.5 million views across NHRA’s social media channels in less than 48 hours. A longtime ambassador for the sport, McBride was thrilled with the accomplishment and the light it was able to shine on the sport.
"It was my honor to be here and to be supporting NHRA because I'm a major drag racing fan, you know, right down to the sportsman guys,” McBride said. “I just want to do everything I can do for drag racing. We've had a lot of help from people, a lot of people who have pitched in to help us a little bit so we could do the show that we were brought here to do.”
McBride believes there’s plenty more left in the Top Fuel Motorcycle, too, and “Spiderman” quickly confirmed he’s confident a 270-mph run is possible.
“Absolutely,” McBride said. “If I hadn't had to pedal it on that run it would have been 270 that pass. “
As for the key to making a historic run, McBride kept it simple.
“Hold on tight. Stay down low. Throttle works both ways,” McBride said.
For more information about NHRA, visit www.nhra.com.