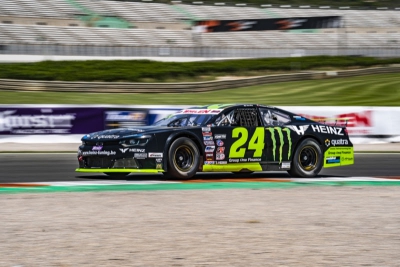 After examining further evidence brought to their attention, Race Control and the Stewards’ Board overturned two of the penalties handed in EuroNASCAR PRO Round 02 concerning Alon Day and Gianmarco Ercoli. Day was declared the winner of the final race of the weekend, while Ercoli was handed second place behind the Israeli and ahead of his teammate Nicolo Rocca, who moved from first to third.

The EuroNASCAR PRO points standings will see Nicolo Rocca lead the field at Brands Hatch on June 11-12 when the NASCAR Whelen Euro Series will visit the United Kingdom for the 9th edition of the American Speedfest. The Italian will defend a 1-point lead on Alon Day.

In EuroNASCAR 2, an infringement discovered on the #5 Academy Motorsport / Alex Caffi Motorsports led to a 10-place penalty for race winner Vladimiros Tziortzis. Alberto Naska therefore inherited the win in what was just his second career start in NASCAR. The Italian will lead Martin Doubek and Tziortzis in the points standings entering the second event of the season.