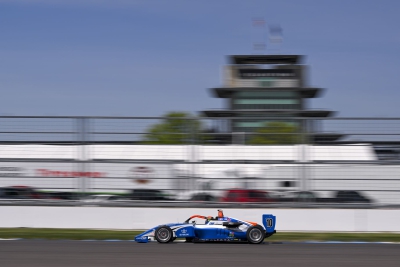 It was a tough weekend for Thomas Nepveu, a young driver competing in the USF2000 series with DEForce Racing. Nepveu had a triple header at the Indianapolis Motor Speedway road course. The event kicked off the Month of May activities surrounding the Indy 500 later this month.

The field was undoubtedly strong at this event, as it is every young driver's dream to climb on top of the Indianapolis Motor Speedway podium. That was the case for Thomas Nepveu, who set the third-fastest time in qualifying. He started from 4th place in both the 2nd and 3rd races.

The first race set the tone for the rest of the weekend, as it was a very chaotic race, in the words of Thomas Nepveu. "I had a good start, but when I went into the first corner, a competitor went on the inside line and passed me like a bowling ball and used me to stop," he explained. "I went into the grass, which dropped me to eighth or ninth. Thanks to the restart, I was able to work my way up through the field to fourth. We had a perfect pace and an excellent car that should have finished in the Top 3, but I had a contact which damaged my front wing. So that hurt the car's aerodynamics, and I finished in 5th place."

The driver of the #10 Cromwell | Pétrole Bélanger | Home Hardware | Karting Excellence car was hoping for a better race on Sunday morning, but as dawn broke over Indianapolis, it was adversity that awaited Thomas instead. "I had a good start in race two," he said. "I fell back to fourth and was trying to pass for third. Jace Denmark and I had a pretty intense battle before the caution. But at the restart, I had a contact in turn one and went into the grass. By the time I managed to get back on track, I had lost too much time to get back into the top 10. The important thing is to have scored a point, but the result is not what we wanted."

The final race of the weekend went better, as Thomas moved into the Top 4, with a podium finish in his sights. "The start was pretty calm, which was a good change from the other two events! The top 4 had a slight gap on me, but I could defend my position while trying to catch them. Lap after lap, I was getting a little closer to them, but I was two laps short of fighting for 4th place. However, I'm happy with the points I got!

"This is not the result we wanted after the successful qualifying session," said Coy Arbour, Thomas' coach. "Indianapolis always has some 'crazy' races, so we're happy to have collected the points from the two Top 5's. Now we look ahead to the only oval race of the season."

Thomas Nepeuve and DEForce Racing will return to Indianapolis May 26-27, but this time on the prestigious Lucas Oil Raceway oval, which is the host of the Indianapolis 500.