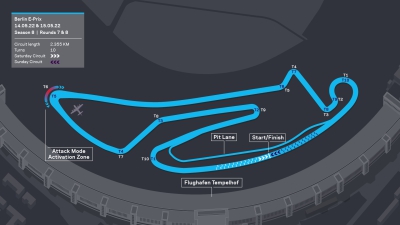 Formula E’s 11 teams and 22 world-class drivers return to the German capital – a fixture on the calendar since the inaugural 2014/15 season – to tackle an anti-clockwise and clockwise variation of the circuit.
WAYS TO WATCH: Where and how to watch every minute of Season 8
As it stands, just 10 points split Drivers’ World Championship leader Stoffel Vandoorne (Mercedes-EQ), Jean-Eric Vergne (DS TECHEETAH), Mitch Evans (Jaguar TCS Racing) and Robin Frijns (Envision Racing). With 58 points on offer over the race weekend, there will be twists and turns before the chequered flag falls on Round 8, and plenty of opportunity for any number of drivers to work themselves into the title hunt.
Saturday’s action gets underway with Free Practice from 07:15 local time, with qualifying at 10:40 and Round 7 itself from 15:00 CET. Free Practice ahead of Round 8 starts at the same time on Sunday, with qualifying also following at 10:40 and the race once again at 15:00. Keep track of all the action at fiaformulae.com/live and tune in where you are via fiaformulae.com/watch.
As it stands…
Last time out, Vandoorne wrested control of the Drivers’ championship after steering to victory in the Monaco E-Prix Round 6. The Belgian fended off the attentions of Jaguar TCS Racing’s Mitch Evans, with the Kiwi unable to convert Julius Baer Pole Position in the Principality, instead winding up second, with DS TECHEETAH driver Jean-Eric Vergne coming home third. Vandoorne has won around Tempelhof before and he’ll undoubtedly be the driver with the target on his back this weekend.
Third in Monaco made it consecutive podium finishes for Vergne after his second-placed finish in race two from Rome. He’s on an unmatched streak of six points finishes - all inside the top eight - and his podium tally of three is a joint-high and a 50% silverware strike rate in Season 8. Consistency is key in Formula E as Vergne knows better than anybody, and even after losing the Drivers' advantage to Vandoorne for now, he knows he's sitting pretty just six points back.

Evans is three points shy of Vergne, while Robin Frijns (Envision Racing) is stringing together a charge another point behind in fourth spot. The Dutchman has scored strongly in all but the opening race of the season, and his three podiums are as good as any other driver in the standings has yet managed.
ROKiT Venturi Racing’s Edoardo Mortara had topped the table heading to Rome, but a pair of retirements in Rounds 5 & 6 have temporarily put the brakes on the Swiss-Italian’s challenge. The Season 7 runner-up will be hoping for better luck in Berlin in Season 8 after a dramatic start-line collision with Evans in the finale ended his, and the Jaguar driver’s, title effort right at the last in 2020/21.
As with Mortara, the pace has been there for the TAG Heuer Porsche Formula E Team pairing of Andre Lotterer and Pascal Wehrlein so far this season. They find themselves sixth and seventh, respectively, and have been points regulars. Monaco was a borderline disaster, however, with Wehrlein suffering a technical issue which forced him into retiring from the race lead. Lotterer, meanwhile, was pushed into the wall at Turn 1 while running in the points.
That left a 30-plus point hole in their tally, but the silver lining was that pace and energy management once again looked strong.
Reigning champion Nyck de Vries (Mercedes-EQ) currently sits eighth in the running with his season yet to fire into life proper, despite a Round 1 win. If he’s to retain his World Championship crown, he must push on in Berlin.

Return to Tempelhof
The net zero carbon race series returns to the 2.4km Tempelhof Airport Street Circuit on the outskirts of the German capital city. Berlin is the only city to have hosted a race in every season of Formula E. In all but one of those seasons – Season 2, when the German round took place near Alexanderplatz – Tempelhofer Feld has been the host venue.
Two different configurations will be used over the weekend with Saturday’s race using the traditional anti-clockwise direction and Sunday switching to clockwise. It’s a unique challenge for the teams and drivers, but one they relish – and a favourite of many. The bumpy concrete apron, higher than usual degradation and high grip takes a toll on energy management and makes race strategies a headache but the action is always among the best on the calendar.

Sebastien Buemi (Nissan e.dams) has six podium finishes in Berlin, and two victories, albeit one at Alexanderplatz. Antonio Felix da Costa is one of three drivers to have two wins to his name at Tempelhof. The DS TECHEETAH driver’s came at the Season 6 finale as he hammered home his advantage to take the title.
Lucas di Grassi won here with Audi Sport ABT Schaeffler in 2019 and signed off on Audi’s first spell in Formula E with another win on home soil for the brand in Season 7. Stoffel Vandoorne (Mercedes-EQ) strode to victory in the last race of Season 6 at Tempelhof.
German team announces Formula E return
ABT Sportsline last week confirmed it will return to the ABB FIA Formula E World Championship from the beginning of the Gen3 era, starting 2023.
The German outfit is set to enter as a customer team and makes its way back to Formula E having been a fixture throughout the championship's first seven seasons. Despite a hiatus in Season 8, following the exit of Audi, ABT can still count itself among the most successful teams in Formula E history, with 47 podiums and 1,380 points to its name.
The team won the first ever Formula E race in Beijing, 2014, while Lucas di Grassi steered to the Drivers' title in 2017. ABT sealed the Teams' crown a season later and partnered with Audi between 2017 and 2021.

Follow live
Follow every lap from Monaco as it happens in the Live Hub. Keep across Live Timing – including a real-time interactive track map and the ability to follow your favourite driver – plus detailed session reports, exclusive interviews, all the standings and results as well as reaction from the ground means fans won’t miss a moment.
New for Season 8, there’s a full race day rundown pulling together everything on-track with the best of social media and in-race clips – alongside the usual Live Hub experience that debuted in Season 7. Get involved using #ABBFormulaE.
The Formula E app allows fans to go behind the scenes and listen to Driver Radio for live reactions from the cockpit and the pit wall as the race plays out. To listen in, download now on iOS and Android.
Watch
Don't miss a minute of Season 8. Keep track of the best ways to tune in where you are at fiaformulae.com/watch.
Get involved
Formula E blurs the lines between the real and virtual worlds of motorsport and there are even more opportunities to engage with the championship in Season 8, even if you can’t be at an E-Prix in person.
Formula E is the only motorsport in the world that lets fans play an active role in influencing the outcome. FANBOOST for Rounds 7 & 8 opens on Tuesday 10 May, until 15 minutes into race one, with voting for Round 8 opening at the chequered flag on Saturday. To give your favourite driver an extra boost of power, visit FANBOOST and the Formula E app.
Can you predict the unpredictable? The Formula E Predictor puts you in the hot seat to predict each round of the ABB FIA Formula E World Championship.
It's free to play, and points are awarded for each correct prediction. Make your picks for five race outcomes - selecting from the 22 Formula E drivers that you think will win the E-Prix, clinch Julius Baer Pole Position, set the TAG Heuer Fastest Lap, be the first to use ATTACK MODE and be the driver to make up the most places in the race.
Rate this item
(0 votes)
Tweet
« Worldwide Rights to Kyle Busch Documentary "ROWDY" Acquired by Utopia Lots of Lexus Love for Mid-Ohio »