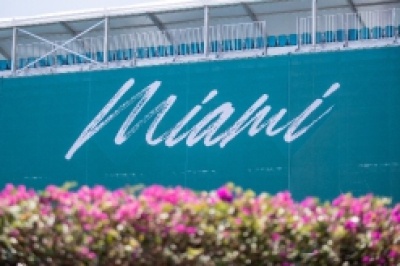 One of the most anticipated new sporting events of 2022 is finally here – the inaugural Formula 1 Crypto.com Miami Grand Prix. As part of a festival fitting for Miami and South Florida, the Formula 1 World Championship race will be run on Sunday, May 8, and will air live on ABC, with coverage beginning at 2 p.m. ET.

ESPN and ABC will surround the race telecast with an unprecedented amount of programming and content across platforms including the live, on-site presence of SportsCenter, Good Morning America and Marty & McGee as well as robust social media and digital content that will include a live preview show on race day and a football skills contest between F1 drivers and members of the NFL’s Miami Dolphins.

The first of two F1 rounds that will be held in the United States this year, the race will be run at the new Miami International Autodrome, a 19-turn, 3.4-mile circuit built in the complex of Hard Rock Stadium, home of the Dolphins.

ESPN and ABC will utilize a set situated adjacent to the race circuit and across from the site’s yacht club and marina, providing a picturesque setting for programs and reports, as well as other locations around the circuit. Among additional content on ESPN and ABC platforms surrounding the race telecast:

For fans attending the event, ESPN will operate a 360-degree photo booth in the North Fan Zone on Friday, Saturday and Sunday. Fans will pose with helmets, flags, trophies and champagne bottles for a 360-degree, high-quality slow-motion video available to share instantly on social.

In addition to the race, qualifying and all three practice sessions will air on ESPN networks on Friday and Saturday with streaming of all sessions and the race on the ESPN App. The race and qualifying telecasts will air commercial-free with sponsorship from Mothers Polish.

Race day coverage will begin at 2 p.m. with the Grand Prix Sunday pre-race show, with the race start at 3:30 p.m. The race also will air in Spanish on ESPN Deportes with coverage beginning at 2:30 p.m.

All programs also will stream on the ESPN App.