805 Beer Presents New Documentary: The House That Built Me: The Tyler Bereman Story” 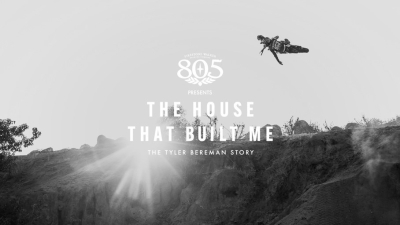 805 Beer Presents: “The House That Built Me: The Tyler Bereman Story”, a feature documentary profiling the professional dirt biker. 805 Beer is proudly brewed by Firestone Walker Brewing Company in Paso Robles, California.
The House That Built Me highlights Tyler Bereman’s small-town origins in Templeton, on the Central Coast of California, where he grew up surrounded by bikes. A lethal combination of style, speed, and the most precise bit of technical prowess, all baked in to produce what is the epitome of a well-rounded athlete that Tyler is today. But he didn’t do it all on his own. Tyler’s grandfather and father poured their lives into his success. It’s under their watchful eye Tyler’s became a name in every moto conversation. Featuring interviews with industry legends including Robbie Maddison and Jeremy Twitch Stenberg, the film unearths who Tyler is and all the people and events that have shaped his path along the way.
Tyler Bereman, known to the world as one of the top dirt bike athletes, has won 10 medals from the X Games including the gold at the X Games in Minneapolis in 2019. Tyler grew up in Templeton, California and currently resides in Murrieta, California.
Rate this item
(0 votes)
Tweet
« Mercedes-EQ's Stoffel Vandoorne Tops the Podium in Monaco Chase Johnson Grabs Second Ocean Sprints Win of 2022 »