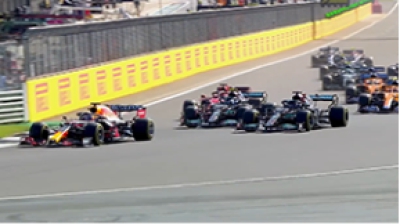 Coming off of the record-setting 2021 season that attracted more television viewers in the United States than ever before, and featured one of the closest driver championships ever, the Formula 1 World Championship kicks off its 2022 schedule this weekend with ESPN Networks once again set to bring action from the full 24-race season to American viewers.

Opening the season will be the Formula 1 Gulf Air Bahrain Grand Prix from the Bahrain International Circuit on Sunday, March 20. The race will air live on ESPN at 10:55 a.m. ET, following the 90-minute Grand Prix Sunday pre-race show that begins at 9:30 a.m.

For Americans, the new season also brings a new race on American soil – the May 8 Formula 1 Crypto.com Miami Grand Prix – giving U.S. fans two F1 races in the country in a season for the first time since 1984. The Formula 1 Aramco United States Grand Prix returns to Circuit of the Americas in Austin, Texas, on Oct. 23.

The race telecasts will again be presented commercial-free with sponsorship from Mothers Polish, which also is the presenting sponsor of practice and qualifying telecasts and race re-airs. CrowdStrike returns as telecast presenter of Grand Prix Sunday.

As it has since Formula 1 returned in 2018, ESPN is again teaming with Sky Sports and Formula 1 to bring Sky Sports’ award-winning presentation of Formula 1 racing to American viewers. As has been done in past seasons, ESPN3 will add bonus F1 programming from Sky Sports during the season.

F1 returned to its original U.S. television home in 2018 – the first race ever aired in the country was on ABC in 1962. F1 races also aired on ESPN from 1984-1997. ESPN’s coverage of F1 also includes a dedicated website that reports on the championship year-round.

All races, qualifying and practice sessions also will stream live on the ESPN App and will be available for on-demand viewing.